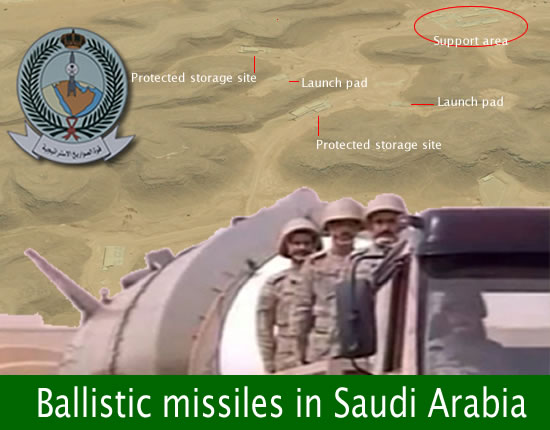 Saudi Arabia publicly displayed its Dong Feng-3 (DF-3) ballistic missiles for the first time in a 29 April 2014 on a parade that marked the end of the largest ever military exercise held in the kingdom. The military exercise and official display of the ballistic missiles, which were acquired secretly from China in 1987 were clear signals Riyadh is directing to both Washington, Tehran and Baghdad. Riyadh acquired the missiles from China during the height of the ‘city war’ phase of the Iran-Iraq, after Washington refused selling short range ballistic missiles to the kingdom.

The DF-3 is deployed with the Chinese strategic missile force since 1971. According to IHS Janes Defense Weekly , Saudi Arabia is estimated to have acquired at least 30 missiles. The missiles are based in underground shelters, There were unconfirmed reports that Saudi Arabia has been upgrading its strategic missile force since 2007, introducing DF-21 (CCS-5) ballistic missiles, also carrying conventional warheads. The advanced DF-21 has a shorter range of 1,100 miles (about 1,700 km) but higher accuracy, which makes it more useful as a conventional weapon. Carried in a Transporter Erector Launcher (TEL) canister it is set to deploy quickly from its underground hideouts and launch within very short time. Its terminal speed is believed to be Mach 10, which makes it highly difficult to engage by missile defense.

The Saudi Arabian strategic missile force currently operates ballistic missiles located at least in three bases south and west south west of Riyadh. Bases with similar facilities were located since the early 2000s north of Al Sulayyil, and at a mountain range in Al Jufayr, the third base near Al-Watah was reported only recently. As part of its modernisation the Royal Saudi Strategic Missile Force has moved in 2010 into a new and modern headquarters facility located in Riyadh. The main advantage of this missile is that it is solid-fuelled, therefore being more responsive and survivable. The CSS-2 is powered by liquid fuel, and therefore requires a lengthy preparation before flight. Through the fuelling process that could take up to three hours the missiles are vulnerable and exposed to pre-emptive attack.

Although an old and relatively inefficient missile, Dong Feng-3 (CSS-2) is considered the biggest and most potent ballistic missile currently operational in the Middle East. The Chinese built missile was developed to carry nuclear warhead, although China has provided the US guarantees that the missiles delivered to Saudi Arabia were modified to carry only conventional warheads. The missile’s range is 1,646 miles (2,650 km) and its payload weight is around two tons.

According to the Saudi media, the exercise, code-named Abdullah’s Shield, involved Saudi troops. The manoeuvres were held in the kingdom’s Eastern province at King Khaled Military City, in Hafr al-Batin, facing Iran and Iraq, and were timed to coincide with the ninth anniversary of King Abdullah’s ascension to the throne. A long list of VIPs attending included the King of Bahrain, Crown Price of Abu Dhabi, and Kuweiti minister of defense. An interesting preeminent guest at the exercise and parade was Gen. Raheel Sharif, the Pakistani chief of Army Staff. According to persistent rumours spreading in the Arab media, Pakistan has helped Saudi Arabia to equip some of its ballistic missiles with nuclear warheads.

The Saudis wanted to signal several things with the exercise and their guest list.” Bruce Riedel, the director of the Intelligence Project at the Brookings Institution wrote in Al Monitor, “First is a message of deterrence to Tehran and Baghdad. The Saudis see the two Shiite-dominated states as existential foreign threats to the kingdom and view the increasingly tight alliance between them as a clear and present danger.

Such Saudi commentators as former intelligence chief Prince Turki bin Faysal have been outspoken in warning that if Iran obtains a nuclear capability, Riyadh will have to develop its own. As one of the architects of the Saudi-Pakistan alliance in the 1970s and 1980s, Turki’s remarks implicitly and deliberately signal where and how Riyadh would acquire its deterrent.” Another message is directed at the White House, Bruce Riedel continues, “US-Saudi relations are far from broken, but they remain strained. Riyadh wants Washington to be tough on Iran and to keep the sanctions regime in place even if a nuclear deal is reached. It fears Iranian mischief-making and subversion as much as nuclear blackmail. Abdullah remains astonished at how naive the United States was in promoting Shiite majority rule in Iraq after the 2003 invasion, an error in judgment the king finds irresponsible to this day. He likes to remind American visitors that he warned against it for years before the war. “