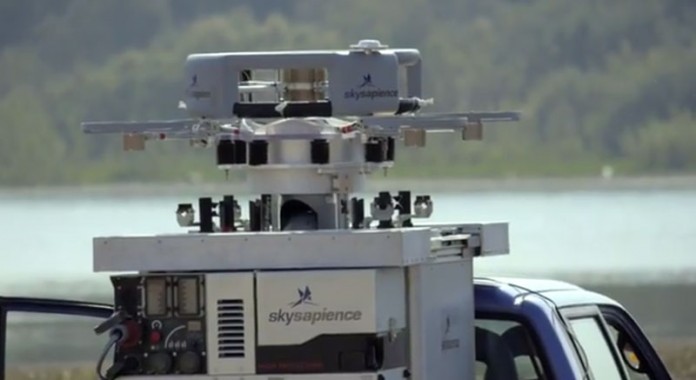 The Hovermast 100 tethered observation system developed by the Israeli company Sky Sapience has completed development in 2013 and already entered operational service with the Israel Defense Forces (IDF). Sky Sapience has recently demonstrated the naval applications of its new Hovermast 100, during a demonstration for a foreign customer the system was deployed at sea, demonstrating effective border control, observation and surveillance missions in both land and maritime environments.

Hovermast operates as a fully autonomous system, using a combination of two counter-rotating rotors and four stabilizing rotors managing lift, attitude, height and orientation. The system can operate from vehicles, vessels on the move or fixed positions. Self contained in a compact container weighing about 300 kg, the system can be installed on standard tactical vehicles, pick-up trucks, armored vehicles, as well as unmanned ground or naval platforms or small vessels. Powered through the tether, the Hovermast 100 can carry a payload weighing six kilograms (13.2 pounds).

The platform can be lifted within seconds to an altitude of 50 meters (164 ft) above ground providing 360⁰ over-the-hill vision, it is ideal for surveillance and observation missions. It can operate at relatively high wind velocity of up to 25 knots. Unlike mast mounted payloads that must be flushed to vertical position, the tethered sensor can also deploy form a slope of up to 20 degrees. In addition to transferring power the tether is also conducting wide-band data transfer from the payload to the ground, eliminating electromagnetic emissions that could be monitored or jammed. The system has already been supplied to the IDF and selected by several international customers.

One of the main advantages of the tethered system is its ability to operate in civilian and non segregated areas (practically everywhere) – areas where other unmanned aerial systems (UAS) are not certified to fly. Being a tethered platform and limited to operate at low altitude, below the level of civil air traffic, Hovermast is not a classified as an aerial vehicle, leaving the operator to maintain operational safety. Nevertheless, the system can deliver highly effective coverage form this altitude, providing military, security, first responders and firefighters an excellent surveillance capability over a wide area.

The system’s operation is simple and intuitive, lifting and retracting is done by a flip of a switch. The vehicle is constantly monitoring its position, altitude and operating status and would issue warning alerts to the operator upon excessive wind velocity, power loss, malfunction or any other issue that would require retraction; the system will retract automatically if necessary.

The standard payload selected for the Hovermast 100 is the T-STAMP from Controp, at a weight of only 2.8 kg, this stabilized payload comprises either a cooled 3-5 micron IR Camera with x 6 optical zoom Lens or an uncooled 8-12 micron Camera with x4 optical zoom. In addition, T-STAMP carries a CCD Day TV Camera with x 10 optical Zoom and a laser pointer. The platform can also be configured to carry additional payloads, including radars, lasers designators, hyprospectral sensors, communications relays, SIGINT and cellular antennas. The system is made of advanced composite materials, is impermeable to water and dust, and operates in adverse weather conditions.

In recent months the company has refined the production version of the platform, implementing improved aerodynamic design, carbon fiber construction and introduction of rotor blades with optimized profiles, contributing to lower weight and higher durability. expanded its operational facilities, completing a new production facility in Yokneam, preparing for serial productions. Meeting a broader range of requirements the company is also developing a larger version of the tethered Hovermast, capable of deploying heavier payloads.