Home Unmanned Warfare Unmanned and autonomous – deep in the ocean and swarming in the... 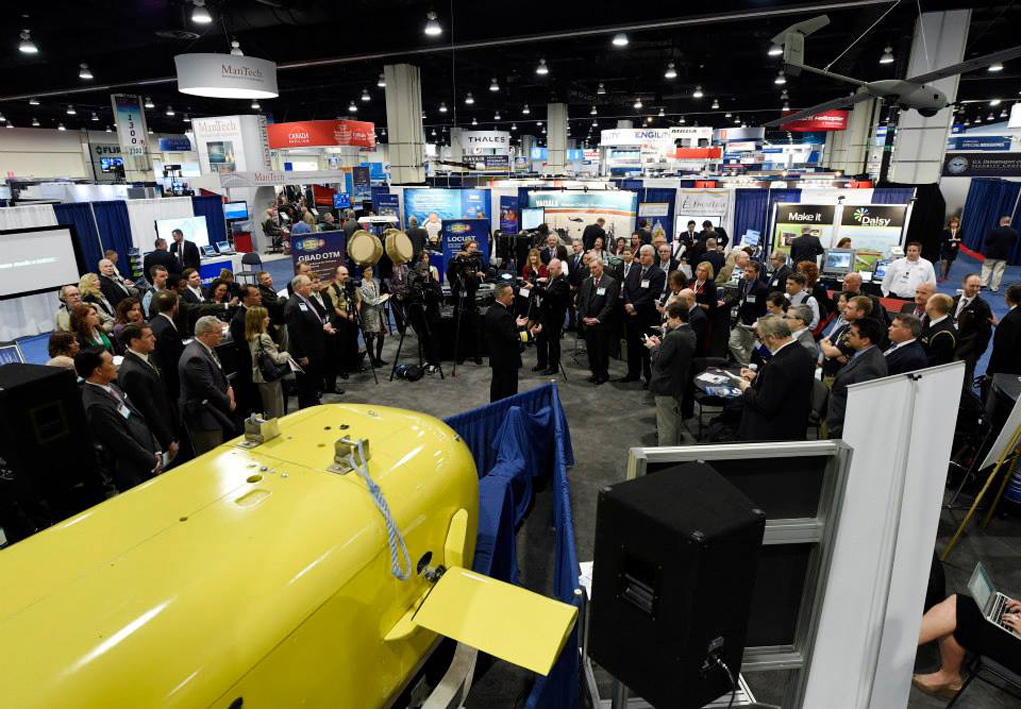 Autonomous vehicles lurking at the abis

The LDUUV system is being developed as a proof of concept system, to accelerate the development of future long-endurance UUVs. Deployed from manned submarines or from amphibious support docks (LHD) surface vessels at stand-off range, such vehicles will be able to conduct autonomous missions as an unmanned mini-submarine, or used to deploy and control smaller UUVs conducting persistent surveillance missions where the enemy would deny access by other means.

The LDUUV is designed to accommodate large payloads (48inx48in cross section). The Navy still is assessing the endurance of the payload-agnostic LDUUV, which is mission-dependent, but confirmed that it has operated at sea for more than 30 days at a time. To sustain such long missions the Navy is developing air independent fuel cell propulsion systems that can deliver 37kW of power for a duration of up to 70 days. Infinity and General Atomics are developing these fuel-cell propulsion systems. Initial testing of the vehicle’s long endurance mission is expected during an open-ocean voyage off California in 2016, with LDUUV sailing underwater from San Francisco to San Diego.

According to Rear Adm. Mathias W. Winter, the LDUUV, displayed publicly for the first time at the expo, has two more years of development ahead before it makes the transition to a program of record. (SeaPower)

Such sensors could be based on the compact and affordable Sandshark UUV platform developed by Battelle’s Bluefin Robotics. The new platform uses open source code, enabling developers to design and update the functionality of the system faster and more flexibly than with the proprietary code used before. The system weighs only 6.8 kg (15 lb.) employs separate modules for the tail (propulsion, guidance) and front (sensors). SandShark is currently in development and is slated to begin open water testing in the summer of 2015.

Bluefin has also developed one of the largest UUVs known the Proteus – a system developed as a dual mode (autonomous UUV or manned Swimmer Delivery vehicle (SDV). With large payload capacity, long range, high endurance, and advanced autonomous behaviors, Proteus provides capabilities unavailable in other unmanned underwater vehicles (UUVs). At a length of 7.62 meter (25-foot) long, weighing 2.8 tons (6,200 lb.), Proteus can haul two 100 kg (220-lb.) bomblets, and has with room to fit 250 kg (550 lbs.) of submerged cargo, or six divers in its optional manned mode. various battery configurations ought to give it a range of 900 miles and a top speed of 10 knots. The flooded vehicle design provides more room for payload. Proteus has 170 cubic feet of space as well as variable ballasts, which allows it to carry and lift heavy loads weighing up to 3,600 pounds.

Compared to conventionally-sized UUVs, Proteus markedly reduces the need for frequent launch and recovery for any of these applications and can carry much larger payloads or cover much greater distances than has previously been possible. In applications such as undersea inspection that now depend on remotely-operated vehicles (ROVs), Proteus can reduce the need for costly surface support ships because it can operate autonomously. Moreover, many submarines can carry a single vehicle (SDV or UUV) in their dry deck shelter. Operating Proteus, both operations can be fulfilled on a single mission. Proteus can be operated manually, autonomously or in a combined manned and autonomous modes.

The vehicle can be used for a variety of tasks including: payload integration, test and comparison; advanced autonomy development; long range and standoff experiments; transporting and installing equipment on the seafloor; inspecting undersea infrastructure such as bridge pilings, undersea pipelines and oil rigs; and transporting divers and cargo.

Other unmanned systems will also be deployed on the sea surface. Medium Displacement Unmanned Surface Vehicle (MDUSV) program will be to autonomous surface vessels what LDUUV-INP will be to the undersea autonomous realm. The technology will be joined with an emerging new platform called the Antisubmarine Warfare Continuous Trail Unmanned Vessel (ACTUV), a future 40 meter (130-foot) long vessel to be tested in partnership with the Defense Advanced Research Projects Agency. This joint, modular platform is designed for multimission capabilities and modular payload options and will bring new advances in speed, endurance and sea-state capabilities. On display is a model of The project will include the use of ONR-sponsored autonomous technologies similar to those used in autonomous swarmboats.