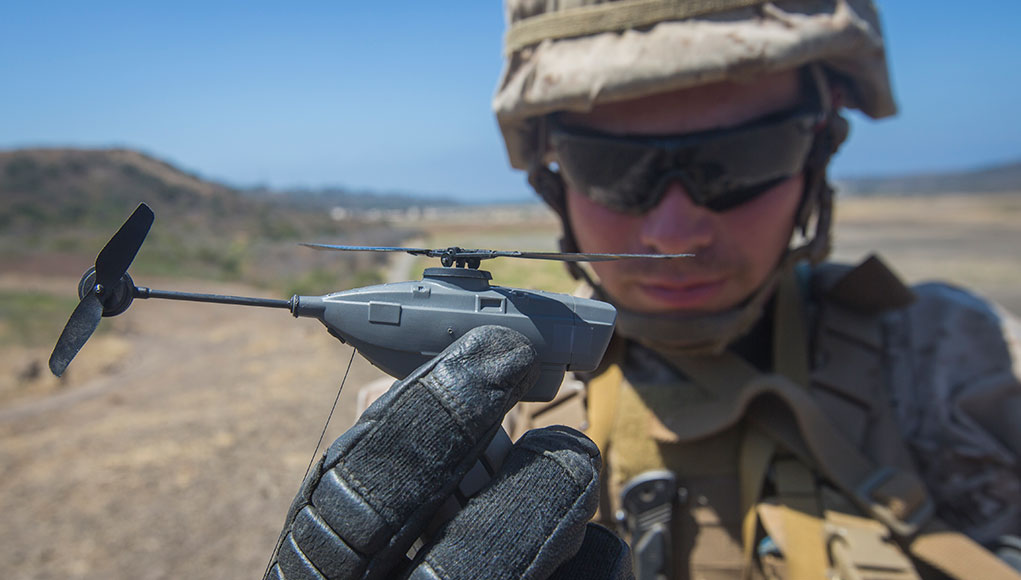 Skeeter is a new drone being developed by Oxford U.K. based Animal Dynamics (ANDY) under MOD supported DisCap program. Skeeter will improve over the Black Hornet in its ability to operate inside buildings, using internal obstacle detection capability. It will also be able to perch for longer periods in one place, thus extending mission endurance staring and listening as it waits for suspicious enemy movement.

Using bio-inspired flight that mimics the flight of an ornithopter such as a dragonfly, Skeeter uses two pairs of flexible flapping wings to achieve hovering, forward flight and directional control.

Skeeter is one of the several promising programs to be supported and financed by the British MOD for their potential to introduce ‘disruptive capabilities’ for future military operations.

Formed of a composite structure the drone’s skin is embedded with electronic circuits that enable advanced autonomous flight. Each ‘dragonfly’ will carry multiple forward and side looking sensors enabling intelligence gathering in day and night. The nano drone will also have obstacle avoidance capability that relies on bioprincipic design (using design rules that follow, not copy natural behavior).

The artificial nano dragonfly will weigh about 12 grams and measure about 10cm in length and span. The flapping wings can move 20 degrees up and down and 45 back and forth, flexibly changing pitch and shape in a rowing motion providing the lift and directional thrust. The tail can also move 15 degrees to each side, providing directional control. The Skeeter can fly at 72km/h.

According to British MOD scientists, these tiny flying sensors have the capacity to revolutionize intelligence gathering in complex urban environments.

The Skeeter is part of the Stratus DisCap project ANDY in partnership with DSTL. Specialized in the development of nature-inspired systems Animal Dynamics (AnDy) was created within the zoology department of England’s Oxford University.