Among the innovations introduced at IDEX 2017 by international players are the Fantom unmanned combat vehicle from Ukraine and Mwari light reconnaissance/attack aircraft from South Africa.

The Fantom is a 6×6 unmanned tactical multipurpose vehicle developed by the Ukraine-based SpetsTechnoExport (SFTE) company (part of the Ukroboronprom conglomerate). The unmanned vehicle has a hybrid all-wheel drive, independent suspension and hydraulic brake system to enable high mobility offroad, including on rocks, snow or sand. The vehicle is remotely controlled from a mobile unit that can remain at a distance up to 10 km away. The unit can also operate in complete radio silence at ranges up to 5 five kilometers using fiber optical cable.

The Fantom was displayed for the first time last year, at the Kiev Defense Show and was shown to defense officials in an operational demonstrated December. The most recent configuration on display at IDEX 2017 carries a weapon station mounting a 12.7 mm machine gun and three Barrier anti-tank missiles. Effective at ranges from 100 to 5,000 meters.

Following the successful sales of South African defense products in the Middle East, the South African Paramount Group is planning to expand its activities in the UAE, with the introduction of a new light reconnaissance aircraft – Mwari. This new aircraft is tailored for Middle Eastern operators, blending the speed and maneuverability of fast jets and loitering and attack capabilities of combat helicopters. Paramount is negotiating sales of Mwari with some customers in the Middle East and is expecting orders over the next 12 months. According to the chairman Ivor Ichikowitz his company is cooperating with Boeing to integrate an advanced mission system for the Mwari. 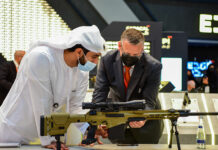 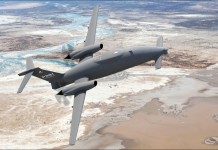