“The U.S. Army has witnessed drones as a threat in theater,” said Maj. David C. Andrews, Fires Center of Excellence, C-UAS mobile capability lead. “Our enemies are adapting, and this capability is the leading system to detect and defeat that threat.” 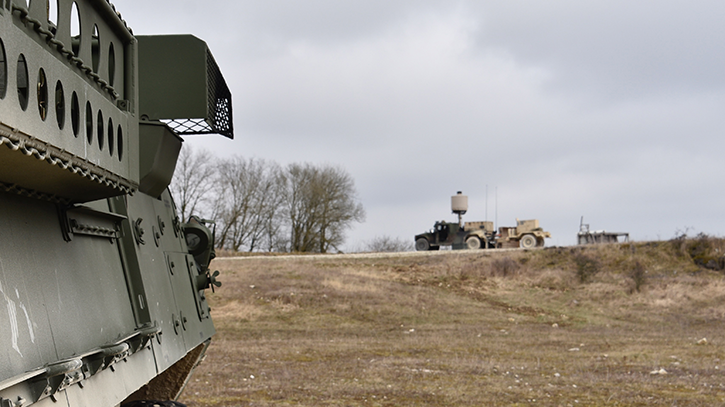 While the CMIC capability has been in development for three years, testing of its mobile integration onto two Stryker Vehicles took place last October. Now, for the first time, it is being implemented into a training environment with the 2d Cavalry Regiment, part of the US Army in Europe. 2CR Field Artillery Squadron, as the proponent for the fielding, conducted new equipment training Feb. 27- March 30, 2017, at Grafenwoer Training Area, Rose Barracks, Germany. During the training staff identify capabilities, limitations and developed Tactics, Techniques, and Procedures (TTPs) for tactical employment during fielding.

“During training, I have been able to work directly work with radar for the first time,” said Staff. Sgt. Matthew Braddock, Fire Support, FA 2CR. “I am able to pick up and track things I wouldn’t normally see with higher resolution and better clarity.”

This training comes as an additional skill set for Soldiers who primary occupational specialty ranges from infantrymen, Electronic Warfare personnel, and forward observers.

The complete integration of the C-UAS system, which utilizes two organic mounted Q-50 radars and along with the two CMIC Strykers, will be employed during Saber Junction 17 and continue to support ongoing missions within the ESAREUR theater of operations.