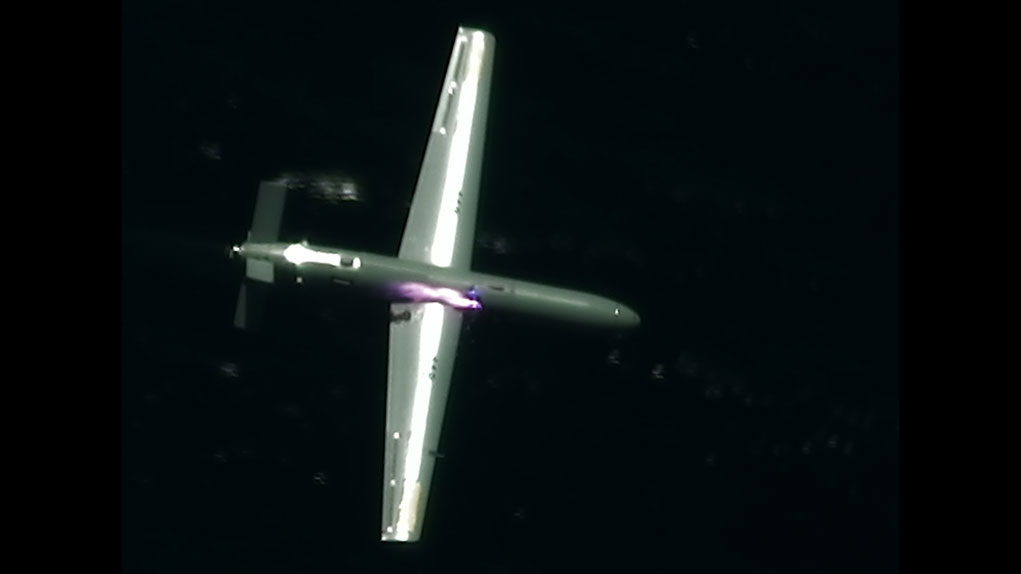 Israel’s Ministry of Defense (IMOD) has recently completed a series of tests in which an airborne, high-power laser weapon system (HPL-WS) prototype intercepted multiple aerial targets in quick succession. Elbit Systems developed the system under the high-power laser program led by the Directorate of Defense R&D (DDR&D) at the IMOD. This game-changing series was conducted in a testing field in the center of Israel, in close cooperation with Israel’s Air Force flight test center, “Yanat.”

An HPL was installed on a light aircraft during the test series and was tested in several scenarios. It successfully intercepted and destroyed all of the targets that were launched throughout the test. Some of the targets were Elbit System’s own Sky-Striker loitering weapons. The targets were intercepted at various ranges and flight altitudes, about 3,000 ft. above sea level. The test series is the first phase in a multi-year program led by the Directorate of Defense R&D and Elbit Systems to develop a laser system against a variety of long-range threats.

While the HPL-WS prototype has demonstrated the first step in the intercept of unmanned aerial vehicles (UAV), the new capability will be able to engage more challenging targets. “We believe in the use of a high-power laser to carry out low-cost airborne interception of rockets and hostile unmanned aircraft, closer to their launching areas and away from population centers. It offers a significant change in Israel’s defense capabilities. Oren Sabag, General Manager of Elbit Systems ISTAR, said.

The objective HPL-WS will be able to augment Counter Rocket, Artillery, and Mortar (C-RAM) capabilities such as the Iron Dome. By destroying enemy rockets at a much lower cost per kill, compared to the Iron Dome’s Tamir guided interceptor missiles that cost tens of thousands of dollars per intercept, HPL-WS challenges the asymmetric rockets threat with a competitive battle economy of only a few dollars per kill. According to preliminary assessments, when the HPL-WS reaches full capacity, it will return the investment within few days of high-intensity battles as experienced during the recent operation ‘Guardians of the Walls’. By destroying many of the rockets fired at Israel using low-cost laser as a first line of defense, Tamir missile interceptors will be saved to intercept the few rockets that will manage to evade the first laser ‘fence’.

The key to this capability is the airborne laser operating the HPL-WS high above the ground. Cloud covers, humidity, dust, and turbulences often scatter the laser beams and limit the effectiveness of ground-based laser weapons. The airborne HPL-WS will engage rockets tens of kilometers away, closer to their launch point. Being able to destroy targets in quick succession, the system will reduce the risk of rockets leaking through the air defense screen and enable C-RAM to deal with the rockets risking populated targets in point defense. To deliver this performance, the system will be scaled up to fit on a large aircraft that will be able to loiter above the battlespace and engage rockets in every direction. The system will locate rocket launches, lock on the targets as they ascend on their trajectory, aim and hit the target’s most vulnerable parts (often these are the energetic components – warhead and fuel.

The airborne HPS-WS will complement Israel’s multi-tier missile defense array by introducing low-cost first-tier defense, including the Iron Dome, David’s Sling, and Arrow missile interceptor systems. This system will increase the effectiveness of air defense against existing and future threats in the region. Airborne laser has the advantage of providing a reliable upper layer.

The method of airborne interception by laser offers significant advantages over land-based intercepts, for its low cost per intercept and the ability to position the airborne laser platform above clouds, where they will be able to engage rockets within the enemy area or close to the border, overcoming weather limitations and atmospheric disturbance.

“We successfully intercepted several UAVs in the air, within a range of more than 1km.” Brig. Gen. Yaniv Rotem, Head of Research and Development in the DDR&D, said. “This is a groundbreaking technological achievement, and it is critical for further development of our airborne High-Power Laser System,” Rotem added. The airborne system in eight to 10 years, Rotem said, adding that in another decade, it is hoped that such a system could destroy targets hundreds of kilometers away.

Rotem said that in a few years the ministry aims to build a laser with a power of 100 kilowatts that will have an effective range of 20 km. The ministry is aiming for an operational system by 2024 to be deployed at the Gaza border area for shooting down rockets Rotem said the ground 100 kW system will also be able to destroy targets at a range of 8-10 km.