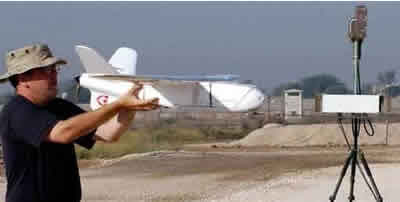 Desert Hawk is a miniature UAV system developed by Lockheed Martin’s Skunk Works group. It is currently as part of the US Air Force’s Force Protection Airborne Surveillance System, or FPASS. 20 Desert Hawk systems (out of 48 ordered) are used in Afghanistan by the USAF, to augment the protection of airbase perimeters, searching for suspected vehicles and people with shoulder-fired missiles lurking to attack aircraft. Desert Hawk can fly at altitudes of less than 330 m’ and can see about 10 kilometers beyond the perimeter of the base.

Desert Hawk is constructed of mold-injected expanded polypropylene – a Styrofoam-like material which is flexible, damage-resistant type of foam. Kevlar skids are used on the nose and tail to improve durability. The sensors are carried in the middle of the fuselage, peeking down at the surface through a notch opened in the lower fuselage. Both color CCD or infrared cameras can be used. The GPS antennae and communications links are mounted on the wings. It uses an electric motor and therefore maintains a quiet operation.

Launched into the air by two people using a bungee cord as a slingshot, the mini UAV flies its mission fully autonomously, at speeds of 40 to 80 km/h, following a flight path that has been plotted out beforehand on a laptop using GPS coordinates. The plane can be directed to circle over an area of interest, or the operator can alter its flight path while the plane is in the air. Its payloads comprise of interchangeable systems, including an infrared thermal imaging system for night use, or a set of three color cameras for daylight.

Each Desert Hawk system, which consists of six aircraft, a ground station, and spare parts, costs $300,000. An improved version of the desert Hawk is currently in development. Most of the improvements will focus on system integration, including cooperative target engagement, with UAVs automatically assigned to locate and track targets detected by ground surveillance radars. Of the 48 systems ordered, four have been delivered to the British Army and more are planned for delivery to special forces units. The British system was tested in Iraq, but deemed unsuitable for operations in Iraq as its downlink was jammed by interference from the Iraqi mobile phone network system.