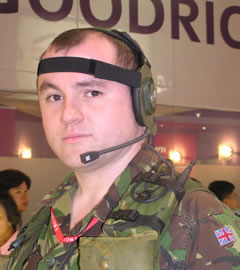 The system uses Wireless LAN technology, transmitting 50mW over the 2.4GHz band, operating a CVSD voice codec over modified 802.11 data communications protocol, the system offers low-probability of interception and detection and is designed to perform in dense electromagnetic environment. The system supports both broadcast (commander to troops or a private conversation between two units) The PRR has an effective range of 500 meters in open terrain; communications can be established through up to three floors in urban environments.

The system uses an innovative Push to Talk (PTT) switch which controls single or dual radios. This apparatus enables leaders to control their PRR and combat net portable radio with the same headset and PTT. The wireless PTT can be placed on the weapon, allowing hands free operation. Each wireless PTT has a unique identity, enabling simultaneous operation of several users in close quarters. The PRR has only two controls – On/Off/Volume switch and a smaller channel selector, switching between 16 preset channels.

Each unit is provided with a specific group, selected from a total of 256 available channels.

The PRR is currently operational with the British and US Army and is procured by the US Army, Jordan, UAE, Italy, Canada, Australia, Ireland, Czech Republic and Republic of Central Africa. The system weighs 1.5 kg. It is powered by two AA 1.5 volt batteries which last for up to 20 hours of continuous operation. Systems are in operational service in the British Army since 2002 and were deployed to Bosnia and Afghanistan.