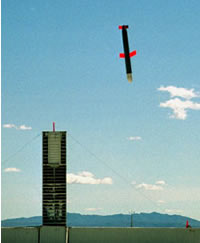 The latest version of the 32 year old Tactical Tomahawk is the Tomahawk Block IV cruise missile, currently in full rate production at Raytheon. Like its predecessors, the missile is equipped with a conventional warhead and offers flexible targeting and loitering capabilities. The new missile is supported by an improved mission planning and platform weapons control capabilities.

Deployed with surface ships and submarines, TLAM is equipped with a two-way satellite data link that enables the missile to respond to changing battlefield conditions. The strike controller can “flex” the missile in flight to alternate targets preprogrammed before launch, or redirect it to a new target. This targeting flexibility includes the capability to loiter over the battlefield, awaiting a more critical target. The missile can also transmit battle damage indication imagery and missile health and status messages via the satellite data link. And, for the first time, firing platforms have the capability to plan and execute GPS-only missions.

Block IV will also introduce an anti-jam GPS receiver for improved mission performance. The Block IV costs less half the price of a newly built Block III missile. Another variant of the Tomahawk is the Penetrator under development as part of a US Navy Advanced Concept Technology Demonstration (ACTD). This missile variant is equipped with a penetrating warhead and a new Hard Target Smart Fuze, also sponsored by DTRA. Further enhancements could also see the use of Morphing Wings, which would enable efficient flight at multiple speeds and altitudes without sacrificing performance as is currently the case when operating off the optimized cruise point.