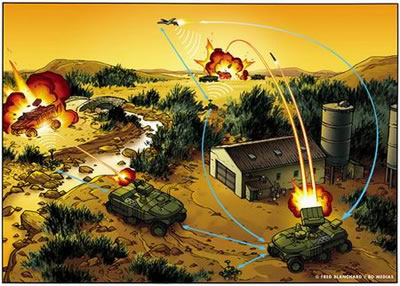 BOA introduces new concepts of net-centric warfighting with existing and future forces, as it ties together all the assets in the air-land theatre, including land vehicles, sensors, UAVs and infantry in mounted and dismounted formations. In the initial phase, the BOA will be examined in a technology demonstrator which will undergo operational testing in the Battlelab – collaborative engineering and operational procedures laboratory, by members from the French armed forces, French procurement agency (DGA) and industry partners. The new concept will increase the operational tempo, offer improved protection and will be focusing on the deployment of light forces, equipped for a broad range of missions, particularly out of area missions and combat operations in urban area.

BOA will initially focus on the Air-Land Operational Cocoon (ALOC) by a Thales-led consortium which includes Sagem and GIAT working in partnership with EADS, and MBDA as well as, other European companies. The program will highlight net-centric force integration, and robotics applicable to future forces.

On 8 December 2005 the French Defense Procurement Agency (DGA) awarded the Thales led team a 129 million Euros contract to develop a concept design demonstrator for BOA1. The program will span over seven years and include the establishment of an integrated battle lab, where new concepts will be studied in a realistic, synthetic virtual environment, using collaborative development tools and simulators. An engineering study of “system of systems” will be evaluate advanced architectures and technologies for close combat, that could be used for in the future by the French Army.

A new network-enabled system called TACTIC3 will be developed as part of this study. TACTIC3 will provide network-enabled architecture supporting close combat operations in the air-land theater, including infantry, armor, UAVs and sensors. This technology demonstrator will  provide an important step toward the future BOA, enabling operational evaluation of the benefits derived by new net-enabled capabilities (including collective protection, situational awareness, employment of precision indirect fire etc.) Such tests will be representative of a joint regimental-level operation.