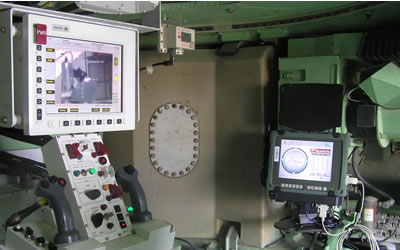 While expensive IR based systems offer superior performance, the most common sniper/gunshot detection systems are the acoustic sensors. Advanced systems employ an array of acoustic detectors (microphones or piezoelectric pressure sensors) which pick up supersonic shockwaves to give an approximate location of gunfire, while analysis of sound waves measured from the muzzle blast further narrow the aiming to point at the source of the gunshot. Such systems can determine the azimuth, bearing, elevation and sometime, even the identification of the firing source. Sensor arrays can also fix on the location of the sniper, enabling rapid and effective counter fire. While acoustic systems have the benefit of instant 360 degrees coverage, but have limited range (typically up to 500 meters). Infrared systems offer limited coverage (typically 120 degrees field of view) but can detect a gunshot beyond 1,000 meters. An integrated system promises to offer hemispherical detection capability at extended distances, well beyond the range of the threat (high power sniper rifle).

Acoustic sensors can be mounted on vehicles, augmenting the situational awareness of the crew to potential threats. Other acoustic sensors can also be used for the location of mortar and artillery fire as well as identify impact points. Acoustic sensors can be deployed in static locations, such as on rooftops, or at remote field locations, where they can rapidly fix artillery and mortar positions. By analyzing the acoustic waves of the passing bullet (Shock Wave) and the Muzzle Blast of the firing weapon, the acoustic sensor extracts the bearing, elevation, range and trajectory of the incoming projectile. A typical acoustic detector is the Pilar, a small-arms and sniper location system. Similar systems include SADS, developed by RAFAEL and the Boomerang, vehicle mounted acoustic gunshot locator system, developed by BBN Technologies. These systems display the fire source on a small LCD or LED display inside the vehicle which enables the crew to effectively respond and suppress the firing sources. When fully integrated in patrol vehicles, acoustic systems are directly controlling remote controlled weapon station to provide rapid reaction. Such a system is the Mobile Counter Fire System (MCFS) developed for the US Marine Corps and Army. For the coverage of large areas, artillery fire location systems, such as RAFAEL’s Artiloc and BAE System’s HALO are used identifying artillery or mortar sources, as well as IED explosions. The system can detect hostile firing near to adjacent friendly forces and identify areas of intensive activities. By detecting the occurrence of explosions of mortar fires, launching of RPGs or improvised rockets, sniper attacks and other gunshots, HALO automatically defines an area assigned with more attention from aerial and ground surveillance, ambushes and patrols.