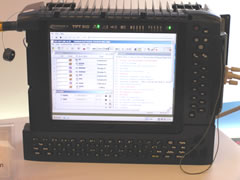 The system employs the GSM-2000, a sophisticated cell scanner, which charts all the cellular traffic in the area, alerting the operator on the presence of defined targets in the designated area. The system operates as a “selector”, locating all known (friendly) units and filtering unknown or suspicious units, based on their individual profiles. When specific sets are identified as “suspects”, they can be individually intercepted, localized and deactivated by the use of Elisra’s hand-held passive Locator which can lead intervention forces to the suspect, or use the Cellective – selective cellular jammer to deactivate the suspected device even without locating it. This new ensemble enables security forces to intervene in an evolving situation in a “surgical” way, without alarming the local population or alerting the suspects.