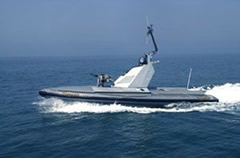 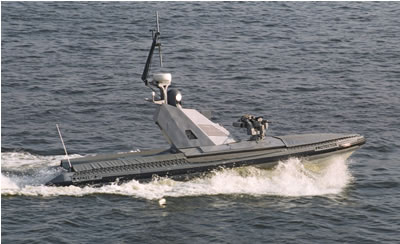 Protector is a remote-controlled Unmanned Surface Vehicle (USV) equipped with a stabilized mini-Typhoon weapon system (MK 49 Mod 0), cameras, radar equipment and electro optics. Highly autonomous, the Protector can successfully operate with general guidance from a commander and operator in port, riverine, harbor and coastal waterways – making it an innovative solution for today’s critical missions, including force protection, anti-terror, and surveillance and reconnaissance. The Protector was developed by Rafael in response to emerging terrorist threats against maritime assets, and is the only operational USV that exists today.

In 2006, BAE Systems and Rafael are teamed for product production and all other program developments with Lockheed Martin leading the Protector team for Littoral Combat Ship and Deepwater programs and Combat System integration efforts. According to Steve Kelly, director of BAE Systems Naval Systems in Minneapolis, “The Protector has performed exceptionally well in the Persian Gulf and Mediterranean,” said “This system is ready and available today to meet the needs of our maritime security and defense forces.”

The Protector will provide Sailors with the capabilities they need to complete their missions more efficiently. The Protector can be the first line of defense, checking-out vessels of interest at arm’s length, while our personnel and capital assets are held at a safe distance.”

In August 2006 the Israeli Protector Unmanned Surface Vehicle (USV) has arrived in the U.S. , to take part in a series of demonstrations for the U.S. Navy, Coast Guard and other maritime security agencies. The main advantage of the system is its flexible configuration ability, accommodating mission specific modules, while preserving speed, stealth and maneuverability. RAFAEL, the developer of the Protector is cooperating with BAE Systems, and Lockheed Martin to pursue business opportunities in North America. Protector has been demonstrated in service with navies in Asia, Persian Gulf and the Middle east. The Protector USV was featured at the U.S. Special Operations Command trade show in Tampa Bay, Fla., in June, and will be demonstrated in Little Creek, Va, San Diego, and Washington, D.C. in the coming months.