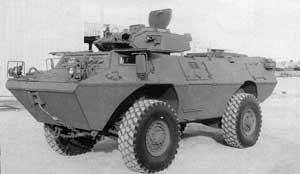 Modular Expandable Armor System (MEXAS) protection,  which has provided basic protection suite for over 12,500 combat vehicles worldwide, including the US Army 4×4 ASV armored security vehicle where MEXAS is used in an armor protection kit developed by Simula. Other MEXAS users include Renault 6×6 VAB and German Fuchs APCs, the new German-Dutch GTK/MARV (also known as Boxer) and the Dingo all protected vehicle. Mexas is also utilized as add-on armor for Leopard 2 tanks, Canadian Leopard I family of armored vehicles and Norwegian M-113 APCs operating in Kosovo (KFOR). As with other MEXAS applications, the M-113 protection can be applied in different levels to protect against threats from 14.5mm AP up-to 30mm AP, while surviving heavy AT mine blasts (TMRP 6 EFP, TMA 1-5 and TM46). A follow on to the MEXAS protection system proposed by IBD is the AMAP.