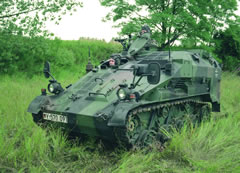 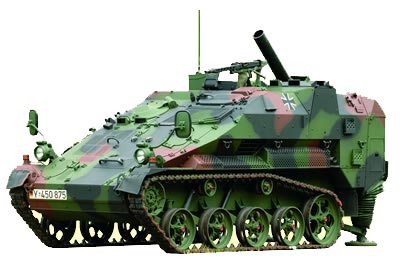 The new airmobile mortar combat system based on the Rheinmetall Defense Wiesel 2 tracked weapons carrier was shown for the first time at Eurosatory 2006. The complete system, including mortar carrier, reconnaissance and command vehicles were on display. The system is air transportable as a sling load underneath a CH-53 or in a C-130 or C-160 aircraft. The mortar carrier is equipped with externally mounted mortar firing standard or specially developed ammunition reaching a range of up to 8 km. The armored, NBC protected vehicle has accommodation for a crew of three. It has a three-dimensional positioning and heading system enabling autonomous operation.

The system uses Wiesel 2 platforms, configured as combined reconnaissance / fire support elements to support the air-mobile mortar units. The target acquires target locations and imagery by employing on-board sensors, elevated on a telescopic mast, which will be augmented in the future by a range of unmanned air and ground sensors. Target data is constantly relayed to the company HQ, platoon leaders and the JFST via wireless datalinks, also used for the exchange of information with higher sources. The Wiesel 2 reconnaissance vehicle is also equipped with a laser designator, enabling it to operate as a forward observer and forward air controller, illuminating targets for laser guided munitions. 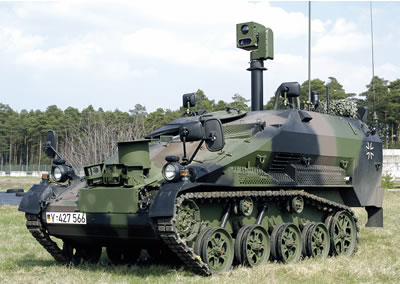