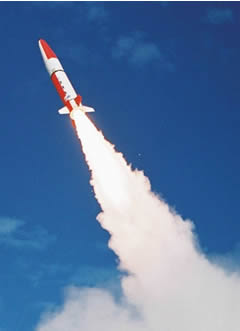 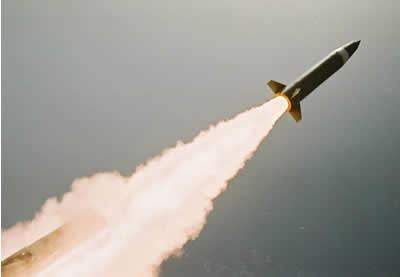 LORA follows a relatively simple three elements design, comprising a warhead in the fore section, propulsion unit, including the solid fuel rocket motor with a nozzle. The nozzle is encircled by the navigation, flight control and guidance unit, which includes the integrated avionic guidance and flight control section, cruciform tail control surfaces, actuators, related antennas and connectors. This simple and modular design contributes to very reliable operation and simple logistics, since all necessary activities can be handled by the avionic unit. The missile’s weighs 1.6-1.8 tons, depending on warhead used. Its length is about 5 m’. and the diameter is 610 mm. LORA is stored in a dedicated sealed canister with shelf life of seven years without maintenance. Since it’s dimensions are larger than the MLRS it requires a special infrastructure. The missile uses an integrated GPS/INS system, used to rapidly establish launch position, without preliminary ground survey and site preparation. The system also determines the exact position of the missile, relative to the target, throughout the flight, enabling flexible maneuvering, maintaining optimal flight path and shaping the terminal effect according to the mission requirements.

While IAI is exposing LORA at Eurosatory 2006 exhibition, the system has already been proven in several tests, including a launch from a ship deck. The program is funded by several customers and IAI is expecting more clients to join the program as it picks momentum. IAI is offering the missile as a weapon system capable of engaging strategic targets deep in the enemy’s territory, from mobile or maritime platforms. Typical targets are fixed or transportable including infrastructure assets (communications, power stations) and surface to air missiles (SAM) batteries, particularly those that cannot rapidly change location. With an accuracy of less than 10 meters, equal or better to that of an aerial guided weapon (such as a 1,000 pound JDAM), LORA can eliminate such targets without warning and without risking an expensive aircraft. The missile can be equipped with a 400 kilogram high explosive warhead or with a 600 kg penetration warhead, to hit hardened targets. The missile can be programmed to hit the target at high angle of attack, of up to 70 degrees, which, together with the high impact speed, maximizes the penetration effect and damage. The missile can perform pre-programmed manoeuvres after launch and after re-entry, to conceal its launch point and intended target, thus preventing the enemy from taking defensive measures or attempting to intercept the missile or launcher.

These capabilities make LORA a weapon of deterrence, which can be susceptible to enemy pre-emptive strike. To survive such threat, LORA has several “built-in” advantages. The missile can be used in two configurations – transportable and maritime. Each concept of operation has its advantages. The transportable version has a minimal visual and electromagnetic signature and a small footprint. It can be easily transported and hidden in areas out of enemy reach. The missile can be launched within few minutes, from unprepared positions. In fact, any target whose location is known within the range of the missile can be attacked within less than ten minutes from the launch decision. As for the maritime version – the LORA can be launched from “blue water”, well beyond the reach of enemy’s coastal defenses. The LORA uses a shaped trajectory flight mode. This feature also contributes to LORA’s immunity to most enemy defenses, including Anti Tactical Ballistic Missile defense systems designed to hit subsonic missiles. It is also immune to electronic warfare (EW) and GPS countermeasures.

A ship borne version of the LORA will include: missiles stored in sealed canisters and a missile control center, located at the combat information center (CIC) of the ship. The missiles are launched in an oblique trajectory, which directs the hot gases to the side of the ship, eliminating damage to systems located on the deck.