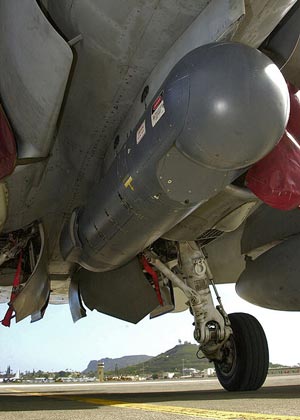 Northrop Grumman has already begun flight testing of a new target ID sensor, and later this year will test a second ID sensor that features an advanced laser. In addition, the new 1k FLIR sensor will undergo preliminary system tests by year’s end as a precursor to flight testing in 2007.

Northrop Grumman’s LITENING AT system is a self-contained, multi-sensor laser target-designating and navigation system that enables aircrews to detect, acquire, track and identify ground targets for highly accurate delivery of both conventional and precision-guided weapons. To date, over 400 pods have been ordered with over 360 fielded, the largest number of any advanced targeting and sensor system. It is currently deployed on AV-8B, A-10, B-52, F-15E, F-16 and F/A-18 aircraft. Since the introduction of LITENING in 1999, the system has undergone numerous major upgrades to ensure continued combat relevance in an ever-changing battlespace, with the fourth generation version the next step in that evolution.