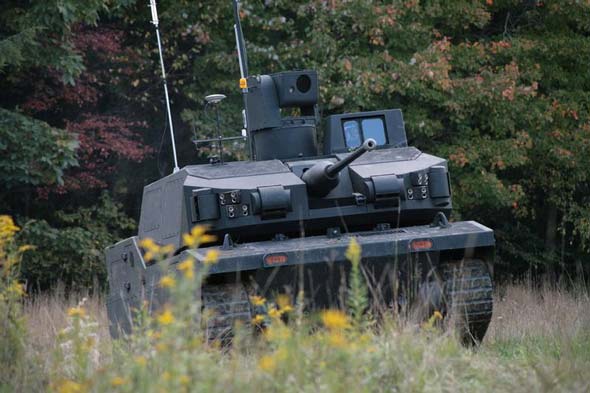 BAE Systems is currently testing a remotely controlled, semi-autonomous armored vehicle known as “Black Knight”, designed as an early prototype of an Unmanned Armed Combat Vehicle. This robotic armored vehicle is equipped with a turret mounting a 30mm gun, and coaxial machine gun, derived from the Bradley combat vehicle.

The Black Knight Unmanned Combat Vehicle can be controlled from the commander’s station of a Bradley. Gun and turret position, as well as information from the Black Knight’s Commander’s Independent Viewer (CIV), and the Improved Bradley Acquisition System (IBAS) can be seen on a the commander’s display. Limited autonomous functions are applied to the turret systems, including the ability for the turret slewing to a cue from the Commander’s Independent Viewer. When dismounted operation is required, soldiers can continue and operate the robotic vehicle through the Dismounted Control Device (DCD). Mobility enhancements completed in 2006 include advanced robotic technology for autonomous mobility. This capability allows the Black Knight to plan routes, maneuver on the planned route, and avoid obstacles – all without operator intervention.