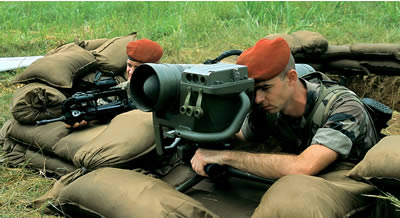 The French armed forces have ordered will maintain the Eryx short range anti-tank missile in service through 2020. Last month MBDA received an order worth €66.5 million, for combat and training missiles destined for the Army and Marine commandos. Deliveries will commence between the second half of 2008 through 2011. Under a separate forthcoming contract MBDA is will also improve parts of the Eryx missiles currently in service, particularly the tripod.

Eryx is a 13kg anti-tank weapon system, capable of defeating armoured vehicles at ranges of 50 to 600 meters. According to MBDA, of the 52,000 missiles produced to date some 7000 were fired scoring over 90% successful hits. The missile entered service with the French Army in 1993 and is operational with seven countries.