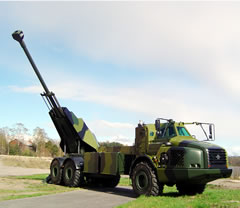 Archer is a self-propelled 155 mm artillery gun system based on a commercial off-the-shelf chassis – originally made for construction equipment – that is both easy and economical to maintain. The gun can be operated by a three-man crew. Due to the rapid rate of fire and autonomy, an Archer gun will provide the same lethality as four to six traditional guns. The gun is designed to fire intelligent ammunition, striking at targets range of up to 60 kilometers with high accuracy.

In September 2006 BAE Systems Bofors has received a contract worth SEK 40 million (US$5.5 million) from the Swedish Defence Materiel Administration for detailed design work on the Archer self propelled, truck based 155mm artillery gun program. The contract includes an additional option worth up to SEK 50 million (US$6.8 million). BAE Systems Bofors previously delivered two demonstrator guns that are now undergoing testing by the Swedish Armed Forces. Order of the final development of a series of 24 guns, to equip two artillery battalions is planned for 2007-2008 with the first delivery in 2009. Final delivery is scheduled for two years later.

In January 2007 BAE Systems received a SEK 100 million (US$ 14 million) contract from the Swedish Defence Materiel Administration for the next phase of the Archer program, supporting continued development of the gun system and the product definition phase on ammunition supply vehicle and modular charges.