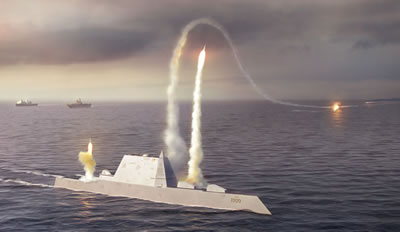 The U.S. Navy awarded yesterday over half billion US$ for continued detailes design of the Zumwalt class destroyer, DDG-1000. Northrop Grumman Corporation (NYSE: NOC) was awarded US$268 million and General Dynamics’ Bath Iron Works was awarded $257 million, bringing the total value spent on the new class’ design to $644 million.

The contract funds further DDG 1000 detail design and procurement of vendor-furnished information and long-lead materials and runs through 2013.

DDG 1000 is the first in a class of the U.S. Navy’s multi-mission surface combatants tailored for land attack and littoral dominance. The ship’s mission is to provide affordable, credible, independent forward presence and deterrence and to operate as an integral part of naval, joint or combined maritime forces. DDG 1000 will provide advanced land attack capability in support of ground campaigns and will contribute naval, joint or combined battlespace dominance in littoral operations. DDG 1000 is in an advanced state of development and will influence ship design worldwide for the remainder of the century.