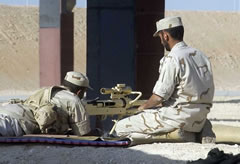 IDEX 2007 which is closing today (Feb. 22, 2007) has attracted 862 exhibitors, who have filled a record total of more than 32,000 square metres of both indoor and outdoor space. 50 countries are officially represented and there are 33 national pavilions. The exhibition has a high technology theme this year and is expected to host more than 90 official government and military delegations.

This year Turkey was the largest national pavilion, in terms of overall booked space. Turkey has chosen IDEX 2007 to reinforce its strong and make its established position in the Middle East defense market. Other national pavilions increased in 2007 were the US, Taiwan, South Korea and Italy. IDEX 2007 has a new venue at the nearby Free Port of Mina Zayed. A fleet of 15 ships from seven countries are berthed at the Naval Berthing area of the Exhibition.

This year many of these ships have been scheduled to visit Abu Dhabi as part of their ongoing deployment in the Arabian Gulf. Among them are two American mine countermeasures ships (MCM) along with mine hunting helicopter operated by the US Navy. Pakistan sent four four ships, including a missile boat, fast patrol boat, coastal tanker and submarine. Australia sent an ANZAC class frigate. Also represented were frigates from France and Germany a Italian corvette and a Sauro class submarine. Four UAE ships will also participate in the naval berthing display.

Except for the static displays and the national pavilions, live demonstrations are always a popular focal point of IDEX. This year the mobility venue has attracted 29 displays from 10 countries of armored trucks, personnel carriers, mobile missile launchers, heavy armor and more. Marine and Amphibious Demonstration will once again take place in front of the Grandstand, fronting the exhibition.

During the show, the UAE Armed Forces announced that it has signed deals with worth over 1,340 million Dirhams (Dhs.) – about US$360 million -with local and international companies participating at IDEX 2007. According to Major General Obaid Al Ketbi, Chief of Logistics at the UAE Armed Forces, a Memorandum of Understanding was signed with EADS, to purchase three air tankers. General Al Ketbi also told reporters that the army was in talks with American communications supplier Harris to purchase telecommunication equipment worth Dhs 240 million ($65 million). Other orders were made with local companies. the services is procuring 12 fast patrol boats worth Dhs.127 million ($34.5 million) with the Abu Dhabi Ship Building Company (ADSB). International Golden Group, won a contract from the Armed Forces worth Dhs 390 million ($106 million) to supply 120mm mortars, The general also announced an Dhs18 million ($5 million) order of 10,000 pistols procured from the local arms producer Caracal.

It was announced that the UAE has shortlisted BAE Systems’ proposed Hawk128 Advanced Jet Trainer, Aermacchi’s M-346 and Korean Aerospace’s T-50 for a future advanced trainer for its air force. 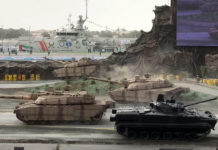