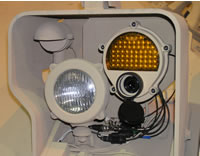 US Army tank crews will soon be able to ‘watch their back’ using new rear-view cameras to be delivered by BAE Systems. The Driver’s Rear View Camera (DRVC) system uses a thermal imager to monitor the area behind the tank day, night and through dust and smoke. The system is part of the U.S. Army’s Abrams Tank Urban Survivability Kit, fits into taillight housings common to more than 200,000 military vehicles. General Dynamics awarded BAE Systems $950,000 contract to integrate and test the system in preparation for an expected initial production contract for 505 systems.

The DRVC system is derived from BAE Systems’ Check-6 infrared situational awareness capability. The camera is contained completely within the taillight housing and can be readily installed on most current and future U.S. Army vehicles with no drilling or welding. The Army is targeting the system initially for the M1 Abrams Main Battle Tank. DRVC also will fit other vehicle types within the Army’s Heavy Brigade Combat Team, including the Bradley Combat Systems, the M113, M88, and M109.