Britain is accelerating the procurement of helicopters in support of operations in Iraq and Afghanistan. The UK has agreed in principle with the Danish Government and AgustaWestland that six Merlin helicopters delivered in the past 12 months to Denmark, will be transferred to the UK, where they will be refitted to meet the British Royal Air Force requirements. Subsequently, Denmark will receive new aircraft from future productions. The RAF will also modernize eight Chinook Mark 3 helicopters at a cost of £50-60 million, to increase its heavy transport capability. The 14 helicopters are expected to be available for deployment in 24 months. The combined program is expected to cost around £230 million.

The six ex Royal Danish Air Force EH101 Merlin Joint Supporters, which will be known as EH101 Merlin HC Mk3As in RAF service, will be equipped with BERP IV technology main rotor blades which will provide further improved performance. The Merlin Mk.3As will be the first helicopters to be equipped with these new technology blades, developed under a jointly funded AgustaWestland and UK MoD research and development rotor technology program.
The acquisition of the six helicopters is expected to cost £175 Million. The new Merlins with operational enhancements and the latest generation of advanced rotor-blades which will enhance their speed, range and lift. This will ensure good performance even in demanding environments like Iraq and Afghanistan. Denmark will then receive six additional aircraft from AgustaWestland. Chinook Mk3s were ordered in 1995 for special operations and were delivered in 2001 but have been unavailable since then due to technical problems. 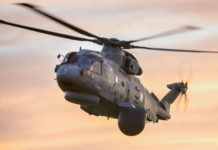 Royal Navy to Induct the Crowsnet New AEW Helicopter by 2020