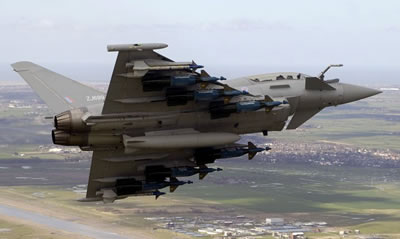 Eurofighter Typhoon is moving a step forward to become a true multi-mission fighter. By the end of March 2007 Eurofighter GmbH, the aircraft manufacturer was officially contracted to extend the capabilities of the aircraft beyond those already delivered with Tranche 1, based on the Main Development Contract. The next stage will focus on air-to-surface capabilities and communication improvements.

The Phase 1 Enhancement program associated with Tranche 2 aircraft will include the integration of new air-to-ground weapons such as Paveway IV and the EGBU-16 (Enhanced Guided Bomb Unit) alongside integrating a Laser Designator Pod (LDP) into Tranche 2 aircraft of all four partner nations. Besides the introduction of air-to-ground weapons, Phase 1 will also provide for full digital integration of the IRIS-T air-to-air missile, in service with Germany, Italy and Spain.

Phase 2 Enhancement, currently in planning, will introduce further improvements for Trance 2 aircraft, focusing on the integration of standoff weapons like Storm Shadow and Taurus. The final Tranche 1 capability already covers air-to-ground operations with Paveway II and GBU-10/16 Laser Guided Bombs (LGB) plus conventional bombs and the gun. The Royal Air Force will receive Tranche 1 aircraft with an integrated LDP already next year. First RAF aircraft to be upgraded under the new Future Capability Programme (FCP) are expected to enter service early in the next decade.

To maintain the single seat aircraft capability in both air-to-air and air-to-ground capabilities, the Human Machine Interface of Tranche 2 aircraft will receive performance upgrades required for the simultaneous Swing Role operation, allowing a pilot to continue a bomb run while at the same time fight air attacks by minimizing the pilot’s workload in complex air warfare scenarios. Further extension of the MIDS performance (Multifunctional Information and Distribution System) is a substantial contribution to this objective.

Meanwhile, flight testing of the Typhoon continues, as the fleet recently marked 5,000 flight hours milestone. Test fleets currently focus on testing and evaluation of new software to improve the capability of sub-systems thus increasing the overall weapon system performance. Another effort is focused on electro-optical systems, finalising the work on the Infra-Red Search and Track (IRST)/ Forward-Looking Infra-Red (FLIR), and the new helmet sight. Integration of the Litening Laser Designator Pod (under contract for the Royal Air Force) continues. Further tests are planned to evaluate the new CAESAR electronic scanning radar antenna, considerd for the enhanced radar under development by the EURORADAR consortium as a potential replacement for current CAPTOR radar.

Testing and evaluation of the new European Long Range Air-To-Air Missile, Meteor is also uderway in Spain and Italy. During five test flights in March 2007, the Meteor was flown by the fourth test aircraft (Spanish) in Moron, Spain on the front and rear fuselage stations in order to collect data on how the missile responds in the vibration, load and temperature environments. Further flights are scheduled later in April 2007 in Italy, where Meteor is planned to fly on the outboard pylons of Eurofighter Typhoon.