The TETRAPOL bw communications system will enable the Bundeswehr to deliver mobile voice and data communication to deployed forces, in a secure and fail-safe network at all tactical communication levels. The system utilizes base stations, deployable, container-based communications modules serving an area at a range of 25 km. The current system will serve 10,000 digital radio terminals (phone handsets). Each handset can also establish direct communication with other handsets, at close range of up to 2.5 km. The German Army has already fielded TETRAPOL systems in Afghanistan and Kosovo, where such systems were deployed as a communication platform and integrated into the command and control system.

TETRAPOL bw will operate at the frequency range of 385-390/ 395-399.9 MHz, which is compatible with international spectrum availability. The system will enable low rate data transfer at 2.4 kBit/s – 7.2 kBit/s, depending on load and availability. 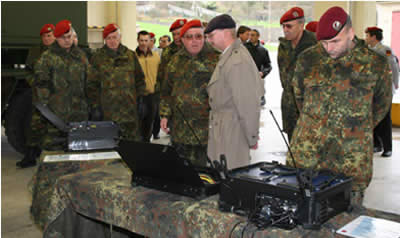 German Army to Get Software Defined Radios for the Infantry