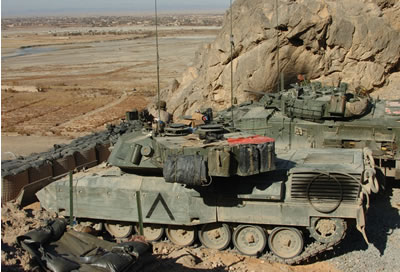 The Canadian Army is acquiring 100 Leopard II tanks, to be delivered from Dutch and Dutch army surplus. The purchase is a change of direction for the army and in particular for Chief of Defence Staff Gen. Rick Hillier, who only a few years ago described the Leopard tanks as “millstone around the neck” of the Canadian forces. The Canadians realized the importance of main battle tanks in recent months, as tanks were rushed in to Afghanistan to support the Canadian contingent stationed at Kandahar. As the new tanks are inducted by the Army, the Leopard 1C2 tanks currently deployed in Afghanistan are expected to be retired from service.

Yet, the intensity of recent conflicts, in Afghanistan, Iraq and Lebanon reestablished the validity of the tank as a highly protected, powerful and effective operational asset, which, at certain high threat scenarios, cannot be matched by more lightly armored wheeled vehicles. When employed in the proper manner, heavily protected tanks can survive most types of anti-armor and anti-material improvised explosive devices (IEDs), including shaped charge IEDs and landmines. They also offer unique capabilities of cross country mobility and counter-obstacle capability that cannot be matched by lighter armored vehicles. The Leopard 2 tanks will provide better protection against IEDs and landmines, compared to the currently deployed Leopard 1C2.

Seeking a solution to renovate its heavy armor, Canada considered several options. The most obvious was to upgrade and refurbish the existing Leopard 1C2 tanks. However, this option was ruled out as the maintenance of these 30 year old behemoths has become too expensive and their future is doomed anyhow – by 2012 – 2015 the Leopard 1 is expected to become obsolete by western standards.

Procurement of new production tanks was also considered, but due to the limited production capacities maintained by western producers, such tanks could be guaranteed only in several years time. Furthermore, the cost of surplus equipment is significantly lower than that of brand new equipment. For comparison, Australia recently bought 66 M-1A1/M88 tanks and support equipment (trucks, transporters and trainers) for A$500 (US$416 million.) Canada acquired 100 surplus Leopard 2 A5 and A6 tanks from the Netherlands at a cost of C$650 million ($574 million). Further 20 combat-ready Leopard 2A6 main battle tanks are to be ‘borrowed’ from Germany, to replace currently deployed Leopard 1C2 tanks before the summer.

These Leos proved to be inadequate for the Afghan summer, as the temperature inside the fighting compartment rose to intolerable levels, due to lack of efficient air conditioning, and excessive heat generated by the hydraulic turret control and engine. The German tanks are fitted with electric turret drive, and will be fitted with air conditioning equipment once they arrive at Kandahar. These tanks are also fitted with an improved main gun and ammunition, designed to operate in extreme climatic conditions. Prior to deployment to Afghanistan, the tanks will be fitted with belly plates and blast-resistant seats to improve protection for the crew. Surplus Leopard 2 tanks, particularly German Leopard 2A4s have been acquired by a number of nations in recent years, and successfully inducted into several armies including Poland, Singapore, Turkey and Greece.

Once all new Leopard 2s are operational, the Canadian Army plans to maintain two combat-ready squadrons of Dutch surplus Leopard 2A6/NL, equipped with about 20 tanks each, rotating through operational duties and depot maintenance, repairs and overhaul. Two training squadrons fielding Dutch surplus Leopard 2A4s will be used for training in Canada. The remaining 20 tanks will be utilized as combat support platforms, including Armored Recovery Vehicles (ARV), Armored Bridge-Laying Vehicles and Armored Combat Engineering Vehicles (tanks fitted with dozer blades, mine ploughs, excavator etc.) Once the tanks arrive in Canada, the Army will seek commercial service providers for long-term support of the fleet, including upgrade and repairs.