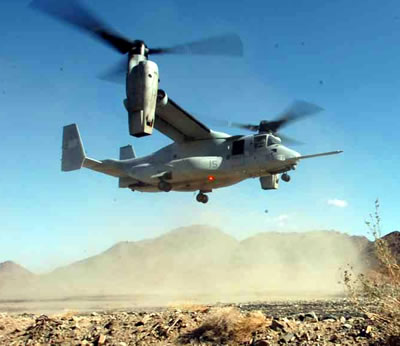 The US Marine Corps will soon deploy the V-22 Osprey tilt-rotor aircraft to Iraq, its first combat assignment. Marine Commandant Gen. James Conway announced last week at the Pentagon that Marine Medium Tiltrotor Squadron 263, with 10 aircraft and 171 personnel will be deployed to Al Asad Air Base in Western Iraq, by September 2007.

The Corps’ tiltrotor MV-22 alternates between fixed- and rotary-wing capabilities, a unique attribute that gives U.S. fighting forces the versatility of a helicopter, with the 300 mph speed and increased altitude of an airplane, reducing the threat from small-arms fire. The Osprey can fly twice as fast and three times as far as conventional helicopters. Its can fly to a range of up to 900 miles without refueling. The Osprey will replace some of the CH-46 helicopters currently deployed in theater. During the final pre-deployment phase, Marine aviators undergo Operation Desert Talon training in Yuma, Ariz. – a location selected for its desert climate and conditions.