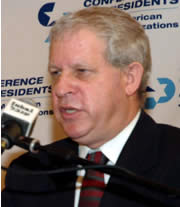 A major issue, which the Winograd Investigatory Commission emphasized repeatedly in their April 30 Interim Report, is largely contributed to the failures and weakness of high-level staff work at the decision-making process of the political leadership. In a democratic state, it should be irrelevant whether the man at the top is a seasoned military veteran, or a civilian with the necessary faculties to lead a nation in peace and war. Therefore a strong crisis management team, manned by professionals, having the trust and loyalty of the supreme leadership, now seems imperative, based on the dubious results of last summer’s Second Lebanon War and its aftermath.

This article will deal merely with these issues, intentionally ignoring all aspects of the many military and political topics, which the commission raised, which will be dealt in an analysis when the final report will be published in late Summer 2007.

“This weakness (in crisis management) existed under all previous prime ministers and this continuing failure is the responsibility of these prime ministers and their cabinets. The current political leadership did not act in a way that could compensate for this lack, and did not rely sufficiently on other bodies within and outside the security system that could have helped it.”

Quotation from the Winograd Report:

As a result of our investigation, we make a number of structural and institutional recommendations, which require urgent attention:

a. The improvement of the quality of discussions and decision making within the government through strengthening and deepening staff work; strict enforcement of the prohibition of leaks; improving the knowledge base of all members of the government on core issues of Israel’s challenges, and orderly procedures for presentation of issues for discussion and resolution.

b. Full incorporation of the Foreign Ministry in security decisions with political and diplomatic aspects.

c. Substantial improvement in the functioning of the National Security Council, the establishment of a national assessment team, and creating a center for crises management in the Prime Minister’s Office.

The enigma of a non-functioning National Security Council

There is no legal provision for a National Security Council in Israel as there is in the US and in other countries in different forms. Founding the committee may have just been the leadership’s way of paying lip service to the idea, following the tragic security events in Israel. Therefore, due to lack of a systematized official system for handling strategic planning at the political top, the only forum which carries almost absolute weight on security issues is the army. Professor Yehezkel Dror, an outspoken member of the Winograd Committee claims that Israel has no comprehensible, competent, strategic doctrine, and the executive branch is devoid of any grand strategic conception. In spite of its national defense doctrine being top priority in a high-threat environment, past Israeli governments and security authorities have taken vital decisions at times of stress without profound analysis, while looking only at short time considerations from a narrow perspective, the professor deplores.

On June 19, 1996, twenty two years after the unimplemented Agranat Commission Report, then newly elected prime minister Benjamin Netanyahu began his first full day in office by establishing the National Security Council (NSC). Unfortunately, Netanyahu dropped the plan because then-defense minister Yizhak Mordechai, a retired general, feared that the NSC would infringe on his sphere of responsibility. It was a serious mistake, unfortunately not the first nor the last in a long line of Israeli decisions. However, when Mordechai was ousted from office, Netanyahu reinstated the NSC, after appointing his former mentor Professor Moshe Arens, a civilian, as defense minister. Unfortunately, the nomination was short-termed, as Netanyahu soon lost his seat to former chief-of-staff Ehud Barak, who took over in 1999. During his term, NSC functionimg again deteriorated, with Barak relying on his own faculties in all defense issues.

Altogether, the formulation of Israeli national security policies has tended to be quite a haphazard affair. It has always owed more to the random predilections of individual political leaders and generals than to a systematic process of reasoned analysis. Israel’s first prime minister, David Ben Gurion made some attempts at sketching a national security strategy, integrating political and military elements, during the first years following the creation of the Jewish state. But the exercise was never formalized. More important, no institutional framework was established in order to facilitate its repetition. The absence of a well-entrenched national security council that might examine and formalize a long-term security concept was to cost Israel dearly over decades. Nevertheless, opposition on the part of the IDF leadership and successive Ministers of Defense with personal military experience, obstructed this initiative until 1999. Even thereafter its formation, resistance remained powerful enough to emasculate the skeleton body which was finally established.

Strangely perhaps, the most serious casualty suffering from this deplorable situation has been the IDF itself. In retrospect its very short-sighted policy backfired on the military establishment in many ways. Foremost was the lack of a sound administration body, not subordinated to the dominant Finance Ministry, which brought about the annual haggling over the defense budget. Bereft of clear national guidelines for a multi-year budget, based on sound strategic assessments, the Defense Department was forced to argue each year anew, with periodic dialogues stressing its needs. Generals were virtually forced to function on a hand-to-mouth agenda, instead of operating within a conceptualized set of principles, guided by clear national priorities and missions, which had been worked out by an independent, apolitical staff, consulting to the top political leadership.

Unfortunately, as the Winograd Report states, on July 12th, Olmert’s decision-making proved extremely demanding. In regard to Olmert’s “hasty” and “faulty” decision-making process, the report concludes that the prime minister was led by the army and predominantly by its chief of staff, who equally shunned his general staff on alternative options, the report stressed. Olmert did not demand the IDF to present alternatives, nor ask the questions expected of him, to clarify the Army’s strategic intentions. In addition, Olmert was unable to create a political horizon conducive to ending the conflict. All these questions, which became crucial under critical circumstances, could have been submitted in a orderly procedure by professional staff work of a National Security Council, having the trust of and loyalty to the prime minister.

Nobody knows the inherent weaknesses of the NSC better than retired Major General Uzi Dayan. Former deputy chief of staff, Dayan became council’s director under the dominant prime minister Ariel Sharon: stepping into the job with high hopes in 2000, but leaving in frustration two years later. Sharon, constantly under severe paranoia because of his coalition members, adhered solely to the advice of his trusted aides – all devoid, unfortunately, of defense-related experience. Sharon, himself a seasoned warrior, took his own decisions in a crisis situation; however, not always the right one, as the notorious aftermath of his unilateral disengagement from Gaza in 2005 clearly demonstrated.

General Dayan was not the only NSC director to quit his post in dismay. No less than three consecutive directors did the same, the last being Major General Giora Eiland, a brilliant strategist who formally tendered his resignation in August 2005. His presence was sorely missed during the following summer crisis in July 2006!?Not that there are legally established political bodies lacking in Israel’s political establishment to fill in the gap. On paper, there are three: the National Security Council, the Foreign Ministry and the Knesset Foreign Affairs and Defense Committee and its highly prestigious sub-committee for secret affairs. Leading Knesset members participating in the committee meetings are of senior military rank, including former chiefs of staff and highly experienced generals. However, their conclusions are usually ignored by political decision-makers, subjected to coalition constraints and politically undermined with notorious leaks to the media. If Prime Minister Ehud Olmert is serious about implementing the Winograd Committee’s recommendations, the time may be ripe for creating an effective National Security Council, former NSC head Giora Eiland told The Jerusalem Post last Tuesday. However, based on the past, analysts consider such implementation in full highly dubious.

In the final chapter of the interim report, entitled “Institutional Recommendations,” the committee wrote: “It is urgently essential to strengthen staff work so that the prime minister will be able to make more educated professional decisions in diplomatic-security affairs. Israel already has such an institution, the National Security Council, but it is vital to rebuild it into an effective system- determined by law.” Dr. Chuck Freilich was Israel’s Deputy National Security Adviser for Foreign Affairs. In a recent article Dr. Freilich aired his discontent over Israel’s top political decision-making process. “If the determination to see the war through to its painful end was lacking – and in broad terms the price was known in advance – the government should have gone through the motions, made some limited response to show its “displeasure” and waited for more propitious circumstances,” Freilich stressed. In his words, the six-year-long state of tenuous “calm”, despite periodic flare-ups on the Lebanese border, was ultimately untenable but acceptable until Israel chose the right time to retaliate. Undoubtedly, Israeli restraint would have strengthened Hezbollah’s stature even more and encouraged further provocations. But the timing could have been Israel’s choosing and then more fully prepared, both militarily and in terms of strategic goals.

This constraint actually paid off once in Israel’s history: On the eve of the 1967 Six Day War, Prime Minister Levi Eshkol vehemently defied a near military coup by his general staff who tried to force him into an early war against Egypt. Eshkol weathered the attack, biding his time, until all his efforts for a diplomatic solution were exhausted. When Israel finally attacked after a three weeks waiting period, with the forces fully mobilized and trained, this tactic brought about a resounding success on all fronts. ?According to Dr Freilich, neither Prime Minister Olmert nor Defense Minister Peretz had time to learn the complexities of the Lebanon issue or the limitations of the IDF’s capability of dealing with it. Israeli political decision-makers, wishing to learn from other nations’ handling of strategic crisis management par excellence, should study the late President John Fitzgerald Kennedy’s admirable conduct of the 1962 Cuba Missile Crisis, a real cliffhanger which prevented a global nuclear conflict only through wise statesmanship, aided by a sound consultation team process.