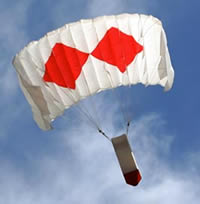 Onyx is an autonomously guided parafoil system designed to enable accurate aerial delivery from high altitudes of up to 35,000 ft and air-speeds up to 150 Knots Indicated Air Speed (KIAS). Maintaining a high glide ratio of over 4.5:1, Onyx can glide autonomously over a distance of 30 miles (44 km), and land its cargo on a preprogrammed target, within a Circular Error Probability (CEP) of 100 meters. These systems are designed for operation from military fixed-wing and rotary aircraft such as a C-130 or C-17.

Onyx is a patented two-parachute (“hybrid”) precision airdrop system combining a high-efficiency, ram-air elliptical parafoil for autonomous guidance, and a round recovery parachute to achieve a reliably soft landing. This combination enables faster delivery through rapid descent and glide speed (up to 80 KTAS), thus reducing vulnerability to wind-induced errors and detection by the enemy, while maintaining soft landing. An advanced auto-pilot autonomously controls the system utilizing its on-board Global Positioning Satellite /Inertial Navigation System (GPS/INS) sensors and weather measurements conducted throughout the flight to navigate the system to a pre-programmed altitude and position, where a second, non-guided round recovery parachute deploys just prior to landing for a soft touchdown at its programmed point of impact.

The Onyx’s flight control system is equipped with adaptive control and flocking, swarming and collision avoidance capabilities enabling the Onyx to operate in dense airspace, simultaneously coordinating over 50 separate payloads, weighing up to 2,200 lbs each. With this technology, multiple Onyx systems (50+) with payloads ranging from small ground sensors or small munitions to mission-critical supplies can be deployed in the same airspace, guiding to one or multiple targets without the possibility of midair collisions. These algorithms operate in a fully decentralized fashion so that there is no need for a supervisory controller. Adaptive Control, an advanced self-learning method for flight control, enables Onyx systems to fly correctly with gross variances in wing loading, asymmetrically-rigged payloads caused by pre-flight rigging errors or cargo changes, and correct for damage induced while in flight.

Onyx can be operated with the JPADS-Mission Planner (MP) or through its proprietary base station software, which enables tracking of multiple systems. This Windows-based system presents tracks of several Onyxes in 2-D and 3-D maps, displayed in real-time during the flight or for post-analysis.

In 2006, Atair Aerospace was awarded a $3.2 million contract by the U.S. Army to supply the Onyx precision guided parachute systems for precision airdrop reliability and confidence testing. The U.S. Air force plans to modify a light version, known as Micro Onyx, to perform precision airdrop of sensor payloads and specialty munitions. The use of a parafoil over a small tail fin provides for significantly increased wing area allowing high standoff and the ability to be dropped from low speed cargo airplanes and even UAVs. Onyx systems are available in three payload configurations: Micro Onyx (0 to 20 lbs), Onyx 500 (0 to 500 lbs / 272 kg), and Onyx 2200 (500 to 2200 lbs / 0.27 – 1 ton). 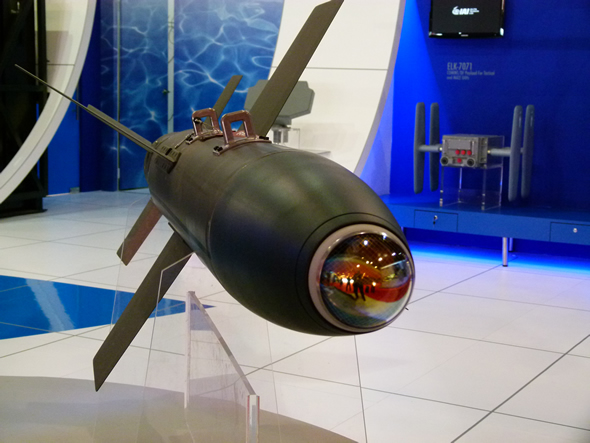