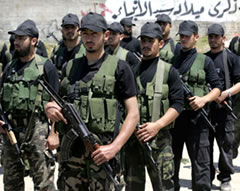 Last month, Palestinian President Mahmoud Abbas (aka Abu Mazen) insinuated that he would like to ask Jordan to dispatch the so-called Badr Brigade to bolster his security forces in the West Bank. The military unit known as Badr Brigade, is a 2000 man military trained unit, under command of the Royal Jordanian Army, but manned entirely by Palestinian Fatah loyalists. Abbas expected PM Ehud Olmert to approve entry of Palestinian Badr Brigade forces to preserve his control over West Bank; The Palestinian leader and also requested Israel’s permission to transfer dozens of armored vehicles from Egypt, or Jordan to Palestinian territories to preserve his control in the West bank territories.

Israel’s defense community officials said last Saturday, that a request had been made by Chairman Mahmoud Abbas to allow a brigade of Palestinian soldiers trained in the Jordanian army, the Badr Brigade, to cross the Jordan River and take up security duties in the West Bank, but that the presence of these troops would interfere with IDF activity in the area, the officials said.

In fact, the presence of Jordanian forces mingling in with IDF activities in the confines of the West Bank terrorist refuges in the densely populated refugee camps needs highly professional experience and sensitive action to prevent serious conflagration with the non-combat civilian population. The IDF has gained valuable experience in such activities, which have already paid off handsomely to virtually nullify suicide attacks on their territory. Should “Jordanian outsiders” venture into similar operations, even if capable in doing so, it would immediately create an alienating confrontation, which could chase these loyal troops into the ranks of Abbas’s opposition, not to mention, entangle them in fighting with the IDF.

This request, by Palestinian authorities is not the first. Prior to Hamas’ takeover of Gaza, Mahmoud Abbas asked that Badr forces be allowed entry to the Strip, but Israel refused. Analysts doubt, if the presence of these troops in Gaza would have stopped the Hamas offensive last month. It should be remembered, that nearly 40,000 armed Fatah loyalist security forces had been trained by US military instructors and equipped with thousands of US supplied weapons, scores of armored cars, all of which fell within days into the hands of Hamas, virtually without opposition.

But in an unexpected surprise move, opposition leader Binyamin Netanyahu has expanded on his general call for Egyptian and Jordanian intervention in the PA, and says Jordan should send over its PLO manned brigade.

Speaking with Israeli reporters in Washington on last month’s visit, the former Prime Minister said that Fatah chief Abu Mazen cannot be expected to maintain law and order in Judea and Samaria on his own. He said that Jordan should dispatch its Palestinian force, known as the Badr Brigade. “The Badr Brigade, which is Jordanian-Palestinian, can create law and order,” Netanyahu said.

Analysts assume the logic behind Netanyahu’s proposal being to roll the problem of the Arabs of Judea and Samaria onto Jordan’s doorstep. Netanyahu is known as a clever politician, who usually does not speak out of turn in such sensitive matters. He clearly understands that King Abdullah II is sensing the heat of the events in Lebanon and Iraq, on his northern border. He realizes that if an Islamic revolution makes its way from Gaza to Judea and Samaria — on his eastern border — he will be placed in an Islamic pincer that will quickly close in on his Hashemite Kingdom. Earlier this year, the king already warned of the “Shi’ite Crescent” threatening the Sunni nations in the Middle East, a signal, which already reverberated throughout the moderate Arab region. The Israeli government shares Jordanian concern over both Sunni and Shi’ite terrorist networks and both countries see Iran as a long-term strategic threat.

Preserving the Hashemite Kingdom of Jordan’s last hope is linked to Israel, and not for the first time. During the so-called 1970 “Black September” PLO riots, backed by Syria and Iraq, the Jordanian Army came under two-pronged attack from its former allies and nearly succumbed, when Israel intervened to save King Hussein’s Hashemite household by concentrating its forces on Syria’s border. The late king, reiterated Israel’s gesture, by secretly informing then Prime Minister Golda Meir that Egypt and Syria were about to attack on October 1973. Unfortunately, Mrs Meir failed to respond in time to head the King’s warning!

Formally, the Badr Brigade was one of four brigades of the Palestine Liberation Army (PLA) established by the PLO in various Arab countries (including the Ain Jalut Brigade in Egypt, the Qadissya Brigade in Iraq, the Hittin and Yarmuk Brigades in Syria, and the Badr Brigade in Jordan). Over time, however, the PLO lost control as these brigades came under the sway of their host countries and, in Jordan, they became a part of the regular Jordanian army while still keeping their Palestinian allegiance.

The Palestinian Liberation Army (PLA) was set up as the military wing of the Palestine Liberation Organisation (PLO) in 1964, with the mission of fighting Israel, but has never been under effective PLO control, but rather controlled by its host governments. At its largest peak, the PLA comprised eight brigades with a total of some 12,000 uniformed soldiers. They were equipped with small arms, mortars, rocket launchers and wheeled armored vehicles and even T-34 tanks. However, the PLA was never deployed in the form of a single fighting unit for the PLO, but instead utilized battalion-size elements as a kind of auxiliary force by its controller governments. The PLA, which became a strong element in Shi’ite South Lebanon, equipped with a massive arsenal, was largely destroyed as a fighting force during the 1982 IDF invasion into Lebanon.

PLA officers later became the core of the Palestinian National Guard, after the signing of the 1993 Oslo Accords, and allowed to re-enter the occupied territories to take up leadership positions in Arafat’s loyalist Fatah security forces. Unfortunately, many of them later side-stepped to bolster the anti-Israeli al Aqsa Martyr’s brigades, leading terrorist activities against Israeli civilians during the “second intifada”. Many of these were killed or captured during the 2002 “Defensive Wall” counter-terrorist offensive in the West bank, which virtually destroyed its infrastructure in one of the largest scale CT operations.

Military experts familiar with the training standards of the Jordanian backed Badr Brigade troops and their leadership claim that their effectiveness in establishing law- and order throughout the Palestinian West Bank, not to mention, the Iranian/ Hezbollah/ al Qaeda backed Hamas in the Gaza strip is at best highly limited. These troops have never seen any action, apart of some training in anti-riot tactics. To set these against the war seasoned Hamas, or even Fatah affiliated combat groups, opposing Abu Mazen, seems quite senseless, as they will quickly be overwhelmed by years of tactical experience by the insurgents. Moreover, Abu Mazen can hardly claim to control the various townships in the West Bank. Major cities, like Jenin, Nablus, Bethlehem and Hebron are virtually controlled by local warlords, commanding highly effective forces. Their loyalty to the Ramallah authorities is questionable at best, but mostly highly suspicious to people at the helm. Even the highly venerable Yasir Arafat skipped his most widely anticipated stop in May 2002 to the war devastated Jenin refugee camp, when his helicopter was prevented from landing by hostile elements in the stronghold for Islamic militants.

There is still no Palestinian direct communications link between Samaria in the North and Judea, in the South, with Israeli full in control of all major throughfares in Jerusalem. With the present security risk still high, Israel cannot afford to allow free-and uncensored traffic of Palestinian armed forces, even those loyal to Abu Mazen through Greater Jerusalem, pending infiltration of highly potent terrorist element into the Holy City. Under these complex circumstances what can a few thousand troops achieve that has not been tried before?

Nevertheless, recently interviewed members of the Badr Brigade – they have kept their unit’s name – expressed their eagerness to project a new image of Palestinians. No longer brutal terrorists; not dust-caked guerrillas staging night raids across the Israeli border, just ordinary cops with polished boots and well-pressed uniforms, assisting in the splendidly routine business of maintaining law and order among their own people. But Wether those troops can bolster Abbas’ loyalist forces in keeping the chaos ridden West Bank and their Warlords under a new law-and order regime, setting a new era in Palestinian-Israeli relations remains highly dubious.