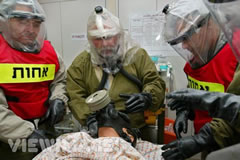 On Friday, August 10, US security Authorities were taking extra counterterrorism precautions in response to what they said was an unsubstantiated radiological threat to the New York City. NYPD deployed special sensors on street, water and air patrols, and were stopping vehicles at checkpoints in lower Manhattan and on bridges and tunnels entering the city. In an effort to prevent panic, New York Deputy Police Commissioner Paul J. Browne called the measures “strictly precautionary”, but the news nevertheless spread like wildfire.

According to a report published by the Jerusalem Post, an Israeli web site reported that a video released last Sunday allegedly featured an al Qaeda spokesman, Californian-born Adam Gaddahn, also known as Azzan al-Amriki, who is wanted by the FBI, who warned of an attack, by means of trucks loaded with radioactive material, targeted against American financial nerve centers. The source, named DebkaFile, is usually reporting from seemingly well placed sources within the Israeli Military and Intelligence Communities, but cannot always be relied-on for accurate, non-speculative nature information.

In fact, Israeli counter-terror sources and even DebkaFile’s monitors have already said that there is no way of gauging for sure how serious these threats are, how real, or whether they are not part of a war of nerves to give the Gaddahn tape “extra mileage”. But, sources indicate, it should be important to note that the exchange of messages took place over al Qaeda’s internal Internet sites which contained the threat of radioactive terror, pointing to specific American cities for the first time, after a long silence on such subjects.

“We are closely monitoring the situation,” said Homeland Security Department spokesman Russ Knocke. “There continues to be no credible information telling us that there’s a threat to the homeland at this time.” But New York has remained on an orange alert – the second highest such level, below red -since the September 11, 2001, attacks that destroyed the World Trade Center. A spokesman for the Department of Homeland Security in Washington said the threat to New York was “unsubstantiated” and there was “no credible information telling us there is an imminent threat to the homeland at this time.”

Nevertheless, separate reports, by the US Department of Homeland Security and the Canadian Border Services Agency have each recently issued security notices alerting law enforcement officials to border-crossing issues, including illicit smuggling tunnels. Canadian official have also issued a warning that “several counterfeit visas have been intercepted at Toronto Pearson International Airport.” No further details were released.

The Threat of Bio-chemical and radiological terrorism

But whether the present threat is real or not, for the time being- the acute danger of bio-chemical and radiological terrorism is certainly building up, creating sleepless nights to international anti-terrorist agencies. And not enough attention is apparently given by national political decision-makers to this highly lethal threat.

In a recent report, published in the Israeli Daily Haaretz, veteran reporter Yossi Melman, reveals the sad state of biological security in Israel, as evidenced by the absence of appropriate legislation and a supreme government authority keeping track of what is being done, to prepare the nation against this horrifying threat. According to Melman, Prof. Ethan Rubinstein conducted a study in which he tried to examine the resistance of anthrax microbes to antibiotics. They published the results of their study, of producing antibiotic-resistant anthrax microbes, in the Journal of Antimicrobial Chemotherapy.

“The study lit a warning light,” says Colonel (res.) Dr. David Friedman, the Defense Ministry expert on biological and chemical warfare. “It could be an example of a research study that is liable to be labeled sensitive.” The dream of every terror organization or enemy country is to get their hands on anthrax microbes against which there is no effective antibiotic or vaccine.

But Anthrax research is only one example of the danger that bioterrorism threatens not only Israel, but th rest of the free world. If terrorists can get their hands on highly toxic material and turn these into lethal warfare elements, the danger to society can become catastrophic. Dr. Friedman, who is a biologist by training, was involved in R&D in the Israel Defense Forces and the Defense Ministry’s R&D. He also served as a representative of the counter-terrorism unit on a special counter-terrorism steering committee established jointly in late 2005, at the department in the National Security Council in the Prime Minister’s Office and the Israeli National Academy of Sciences. The Israel Biological Institute is one of the most clandestine research institutions in the country, where, according to foreign publications, Israel is developing chemical and biological weapons countermeasures.

Nevertheless, Israel may already be preparing at last to face the threat of this kind of unconventional warfare. In a recent nationwide large-scale civil defense drill, anti-terrorist security forces featured a response to a mock chemical terror strike at a school in Ramat Gan. The scenario envisioned a group of terrorists breaking into the school and attacking with a chemical that caused symptoms such as sweating and breathing difficulty. Officials mentioned this being the first of following drills by the Home Front Command.

According to western intelligence sources, Al Qaeda has obtained access to anthrax since already in 1997. Dr. Ayman Zawahiri’s right-hand man confessed that the organization had succeeded in obtaining anthrax and intended to use it against US targets. In 2001, CNN reporter Mike Boettcher indicated the capture of an Al Qaeda bioterrorism manual with chemical formulas and “step-by-step instructions in the manufacture of deadly biological weapons. The Biological warfare sections of the manual, give exact formulas for the production of deadly toxins botulinum and ricin, although there’s no evidence of instructions on how to make or distribute anthrax.

There is no doubt that Al Qaeda has shown an eagerness to use whatever weapons it can obtain against American targets in its terrorist operations, and that makes its efforts to acquire chemical and biological weapons particularly worrisome to United States intelligence officials. The official intelligence assessment is that Al Qaeda has a ”crude chemical and possibly biological capability,” a Pentagon official said recently. In fact, American intelligence officials reported after the 2001 Afghanistan war, that Al Qaeda had already experimented with cyanide gas at a crude chemical weapons research laboratory in Derunta, a small village near the eastern Afghan city of Jalalabad.

There are intelligence reports showing the possible production of small quantities of cyanide gas providing the strongest indication received of Al Qaeda’s success in its efforts to develop chemical weapons. According to US military intelligence, another fertilizer plant was found in Mazar-i-Sharif, which the Northern Alliance captured during the war, which had allegedly been under the control of the Taliban and Al Qaeda, but had also used by Osama bin Laden and his organization, because its equipment could produce either biological or chemical weapons grade material.

That a biological, chemical and radiological terrorist threat is real goes to show without doubt in a December 2004 jihadist website slogan “Dirty bombs for a dirty nation”. Its author, veteran Syrian jihadist named Mustafa Setmariam Nasar, complained that the brutal attack on the New York World Trade Center in 9/11 could have been much more “effective” if the planes were laden with weapons of mass destruction. He proposed that future attacks be carried out with deadly “dirty Bomb” material. His warning should be given serious attention if the West wishes to prevent a new catastrophe.