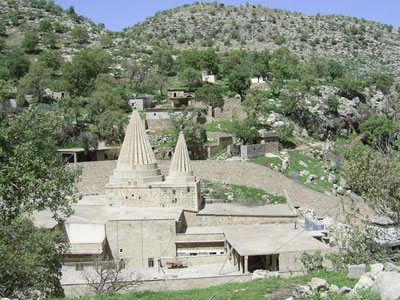 Members of the secretive Yazidi religion are deeply concerned over their future in Iraq after last Tuesday’s devastating attack, which massacred nearly five hundred of their number, in a horrific suicide bombing on their villages. Hardly was Tuesday’s attack on Qahtaniya, located about 70 miles west of Mosul, the first perpetrated against this small sect, numbering barely 500,000 in all.

Some 72 separate attacks were recorded at the hands of Turks, Arabs, Persians and Kurds throughout the Yazidi long history. And no less than 192 Yazidis have been killed in the past four years, since the US Army invaded Iraq in 2003. Although no single organization has yet taken responsibility over Tuesday’s brutality, it clearly bore the hallmarks of al Qaeda, which has been known to regroup in northern Iraq, after being driven out by determined US and Iraqi military action, from their former strongholds in Anbar and Diyala provinces.

Most of the killings were perpetrated on religious grounds as fundamentalist and Islamist groups see Yazidis as infidels who either have to convert to Islam, or be killed.

Fatwas against the Yazidis have been issued even in Mosques by some extremist Muslim preachers. Analysts assume, that the present attack on the Yazidi sect has its origin in an equally brutal incident last April, when a young Yazidi woman, named Du’a Khalil Aswad was stoned to death in Bashika, Mosul, in a guesome example of collective “honor killing”. Islamist groups active in this region exploited the incident, capitalizing on this crime by urging revenge upon the Yazidis, claiming that the woman had converted to Islam to join her Muslim lover, characterizing the murder as ‘martyrdom’, rather than honor killing in the Yazidi sect tradition. Indeed, less than two weeks later, 23 Yazidi workers were massacred, when gunmen hijacked a bus, separated the Christian and Muslim passengers from the Yazidi, which were forcibly taken and executed by gunfire standing against a village wall.

Last Tuesday’s carnage had also clear foreboding signs already written on the wall. The Iraqiyun News Agency which reported eyewitness accounts over leaflets signed by the Mujahideen Army were threatening members of the Yazidi sect. Such leaflets were distributed in Mosul on Monday, the day before the attack, demanding Yazidis to convert to Islam or leave the northern city within three days. The next day someone already struck with horrifying consequences at these hapless people. (The village in ruines after the attack can be seen in the picture below).

Origins of the Yazidi secret faith

The Yazidi or Yezidi are primarily ethnic Kurds. Although the Yazidis speak Kurdish, the origins of Yazidism are ultimately shrouded in Middle Eastern prehistory. During the regime of Saddam Hussein, Yazidis were considered by the Ba’ath Party to be Arabs and thus maneuvered to oppose the Kurds, by tilting the ethnic balance in Kurdistan. However, both ethnic different groups fought together against Ba’athist troops, often in mixed Peshmerga units. Since the 2003 US occupation of Iraq, the Kurds would want the Yazidi to be recognized as ethnic Kurds to increase their numbers and influence under the new political circumstances.

The Yazidi believe that the founder of their religion, Sheikh Adi Ibn Musafir al Umawi, was a manifestation of Melek Taus, “the Peacock Angel”, the central figure of their faith. In their art and sculpture Melek Taus is depicted as peacock. The Yazidi are thought to be unique in their depiction of their primary god as a bird. Tucked away in a mountainous area in northern Iraq, the Yazidi maintain their traditions so shrouded in secrecy, that no outsiders have seen its most important rituals. In fact, few people besides Yazidi religious leaders have copies of the group’s holy books. Some of their opponents even swear, that their obscure faith derided by some as a religion of devil worship. This may well be one of the reasons, but certainly not the only one for the profound Muslim hatred for this strange obscure sect.

But another reason for such irrational attitude, seems a Yazidi belief that their faith is a derivation from Umayyad Caliph Yazid I (Yazid bin Muawiyah), who is revered by some Yazidis. Yazid, second Umayyad caliph (680–683), is particularly noted for his suppression of a rebellion led by Hussein, the son of ‘Ali who brought about the death of Hussein at the Battle of Karbala’ (680). For the Shi’a Muslims, Yazid is the consummate villain, who will always be remembered for his murder of Hussein and persecution of his family. In fact there is little difference between the majority of Sunni and the Shia opinions in this respect.

As for their religious shrines, Sheikh Adi ibn Musafir al Umawi’s burial place is at Lalish, also called: Lalisha nûranî a small mountain valley situated in Iraqi Kurdestan, about 50km north-east of the city of Mosul. Musafir’s resting place is the focal point of Yazidi pilgrimage. Yazidis living in the region are expected to make a yearly pilgrimage to attend the autumn Feast of the Assembly which is celebrated each September.

Ethnic researchers trying to dig into the Yazidi faith assess that their religion actually blends elements of Zoroastrianism, Judaism, Christianity, Islam and other faiths. But there are two other major sects of the Yazidani. Among these the most widely known is the Alevi or Alawi sect. The Arab Alawi in Syria are a branch of the same Alevism, Alawi being the Arabic form of the word and Alevi, coming from the Turkish pronunciation. But neither of these can be classified as real Muslims except by a long stretch, though they do accept Muhammad as one of the avatars of the deity.

While the Yazidi Kurds live mainly in Shangal region of Iraqi Kurdistan around Mosul and Duhok, Efrin and Qamishlo cities in Kurdistan of Syria, Weransehir, Merdin, Midyat, Batman, Diyarbakir, Sirnax in Kurdistan of Turkey and Armenia, Georgia and Russia, there are little known concentrations abroad, some in Europe and others in Canada. A Yazidi community in Canada is associated with the London Yazidi Community Centre there. Some of the foreign born Yazidi have reached prominent positions among their foreign communities. Perhaps the most well known is a young Yazidi woman named Feleknas Uca, 31. Born in Celle in northern Germany, she became a Kurdish member of the European Parliament in 1999, representing Germany’s Party of Democratic Socialism, when only 22 years old!

But whether this small, but courageous community will survive the massive Muslim onslaught much longer, remains obscure as its ancient faith, to which they staunchly adhere to.