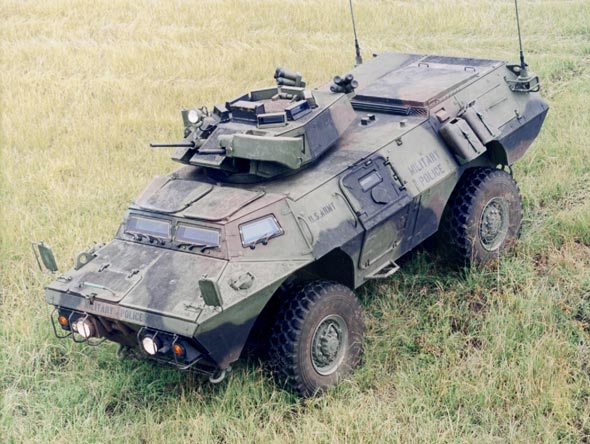 The vehicle is designed to provided maximum survivability with IBD Modular Expandable Armor System (MEXAS) utilizing ceramic composite applique on exterior and a spall liner on interior surfaces. Simula has received an order from Textron Systems to produce lightweight ceramic/composite applique armor kits. The external armor panels provide ballistic protection against various small-arms and fragment threats with a minimum weight penalty. This armor protects the front, rear and sides of the crew compartment from armor-piercing ammunition. The fully armored ASV maintains its air transportability and is lightweight enough for “roll-on/roll-off” from C-130 military transport aircraft in fully armored configuration. The vehicle offers mobility, agility, handling, and ride quality through the utilization of a four-wheel independent suspension systemis equipped with four-wheel independent suspension system.

Additionally, the ASV offers defense from artillery shell fragments overhead and mine blasts under each wheel. The vehicle is fitted with a dual weapon station which, as standard issues on US Army ASVs, mounts agrenade launcher and machine gun. The weapon station enables the crew to load, reload and clear gun jams under full armor protection. With minor modifications and appropriate outfitting, ASV variants can perform a wide variety of missions including scout, infantry personnel carrier, reconnaissance, command and recovery. The vehicle costs about $600,000 each. The US Army ordered 69 vehicles, of which 63 are already deployed in Iraq by April 2004. More than 450 ASVs have been deployed in the Global War on Terrorism in support of convoy protection and other combat missions.

The M1117 ASV is used by the U.S. Army for its military police and convoy protection, and for Combat Observing and Lasing Teams. More than 650 ASVs have been deployed in the Global War on Terrorism (GWOT) in support of convoy protection and other combat missions. Textron Marine & Land is currently on contract for more than 1,360 vehicles. The total multiyear procurement program planned by the US Army includes 1,987 vehicles at a total cost of $1.68 billion.

In October 2006 the US Army awarded contracts for 64 Armored Security Vehicles (ASV) to be modified into “Armor Knight” (M707) configuration under a US$35 million contract awarded to Textron’s marine & land systems.