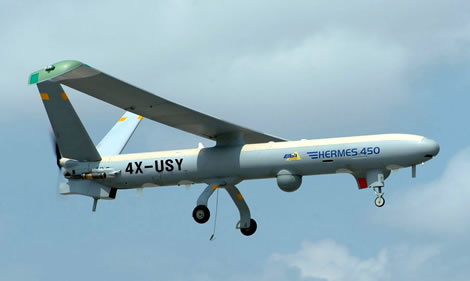 Elbit Systems Ltd. (NASDAQ: ESLT) will supply the Israel defense Forces (IDF) with additional Hermes class UAVs and will upgrade existing Hermes 450 type UAVs currently in service. The company announced yesterday the receipt of a three year contract worth about $30 million system improvement program, which will enhance and expand the IDF’s existing Hermes 450 based platform. Earlier this year the IDF officially acknowledged that the Hermes 450 is operational with its UAV units for several years. During the recent war in Lebanon its UAVs flew many combat sorties providing ISR and combat support for air and ground operations.

The Hermes 450 UAVs are operated by various military forces worldwide and are deployed in battlefields such as Iraq and Afghanistan to the full satisfaction of the customers. Since the first deployment of the Hermes 450, the aircraft was successfully marketed worldwide, and was selected by several international customers, including the UK and Singapore. Elbit recently introduced an enhanced version known as Hermes 450B, designed for the Watchkeeper program. This platform provides more robust airframe, increased payload capacity and extended endurance. In addition to the airframe enhancements, Elbit recently introduced more advanced ground control system which can simultaneously control multiple aircraft. Other improvements included enhanced automatic landing and takeoff capability and advanced mission equipment and payloads offering better performance.

A larger platform known as Hermes 900 is currently in final development and is expected to undergo flight testing in the coming months. This aircraft will share the same infrastructure and systems of the Hermes 450. It is assumed that the IDF will eventually field the Hermes 900.