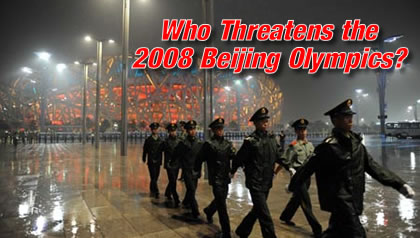 A mere week is left before the Beijing Olympics open and global counter terrorist organizations are on high alert. Especially jittery must be the Chinese security officials and they should have every reason to be so. On August 4, 2008 just few days before the grand opening, two men believed to be Moslems, drove a dump truck into a troop of policemen that were on a morning jog in the city of Kashgar. After the deliberate attack, they continued throwing homemade grenades at the wounded policemen before stabbing them with knives. 16 officers were killed and 16 oters wounded in the attack.

Less than two weeks earlier, on July 23 an apparent terrorist group released a video taking responsibility for bus bomb blasts a few days before in the southwestern city of Kunming that killed two people. The group also claimed as its own, another attack in Shanghai that killed three people last May. In the video, the group calling itself the Turkistan Islamic Party, apparently a Uighur Muslim separatist organization, pushing for independence for China’s far western region of Xinjiang, threatened more attacks, including during the Beijing Games that run from Aug. 8-24. “Our aim is to target the most critical points related to the Olympics, the group warned.

Although the Chinese government has assured its people and the Olympic community, that heavy security will ensure secure games, there is sufficient concern over a possible “repeat performance” of the notorious 1972 Munich Massacre, in which eleven Israeli athletes were murdered by the PLO Black September terror movement.

But for Chinese security, the Olympic terror threat could well be homegrown. This year, among the potential troublemakers which Chinese security specialists have identified are Tibetan separatists, who staged occasionally violent protests last spring. Tian Yixiang, head of the Beijing Olympic Games Security Protection Coordinating Group, said the top “terror” threats to the August Games come from Uighur militants campaigning for independence for Xinjiang in China’s far northwest, from Tibetan independence groups, and from followers of the banned Falun Gong sect. Tian, who has rarely given public comments on preparations for the Games, said a failed bomb attack on a plane in Xinjiang in March and anti-Chinese unrest across Tibet that same month, “amply showed that they are scheming to sabotage the Beijing Olympic Games”.

The East Turkestan Islamic Movement (ETIM) is a separatist Muslim group operating in China’s western Xinjiang province. ETIM is the most militant of the various groups in the Xinjiang region that demand separation from China and the creation of an independent state called East Turkestan. The Xinjiang region is a vast, thinly populated region that shares borders with several countries, including Afghanistan and Pakistan. The ETIM is one of the more extreme groups founded by Uighurs, the Turkic-speaking ethnic majority in Xinjiang, seeking an independent state called East Turkestan. The Uighurs is an ethnic minority group numbering about 8 million of the 19 million people in Xinjiang. Their ethnicity, language, and culture is more similar to the Turkic peoples of neighboring Central Asian republics.

China has long viewed the ETIM and similar groups as a threat to its territorial integrity, and after the attacks on America on Sept. 11, 2001, executed a harsh crackdown on the region by increasing its military presence, detaining suspected members, and limiting religious rights. Chinese authorities blame separatist groups, including ETIM, for more than 200 terrorist attacks since 1990, resulting in 162 deaths and more than 440 injuries.

Uighur extremist elements have been involved in two recent incidents reported by the Chinese authorities from that region. The first incident took place at Urumqi, the capital of the province, on January 27,2008. Chinese security sources mentioned an exchange of fire between the police and some Uighur extremists when the police raided a hide-out of a suspected sleeper cell of the East Turkestan Islamic Movement (ETIM). Being a suspected associate of Al Qaeda with close links to the Islamic Movement of Uzbekistan (IMU) and the Islamic Jihad Union (IJU) or Group, another Uzbek group, these people are dangerous.

While the objectives of the IMU may be regional and confined to Uzbekistan and other Central Asian Republics and Xinjiang, those of the IJU are global in proportion. The IJU projects itself as a global jihadi organization with no specific ethnic identity. A second incident was reported to have taken place on board a Chinese commercial plane flying from Urumqi to Beijing on March 7,2008. Security guards traveling on board the plane overpowered two suspected Uighur extremists, who tried to create a violent incident. The Chinese media has regarded the incident as an attempted terrorist strike. Apparently, the plane made an emergency landing in the northwestern city of Lanzhou. The two persons, already overpowered by the security guards, were handed over to the local police for interrogation. No reports have been available over the outcome and official sources attempted to minimize the affair.

China Spares no Expense to Safeguard the Games

With security of the Games as its paramount concern, China’s efforts – ranging from putting surface-to-air missiles around Olympic venues such as the Bird’s Nest stadium and Water Cube aquatics center, inc

lude the planned closure of Beijing’s international airport during the opening ceremony – are turning this year’s Olympics into the most security-focused Games in history. To ensure security, Beijing already held a series of anti-terrorist drills in June aimed at dealing with possible bomb or chemical attacks, as well as attempts to kidnap athletes. Now the capital is preparing to deploy more than 100,000 police, army troops, and trained volunteers around the capital. Police checkpoints have been set up along major roads to check identity cards for those trying to enter Beijing and primarily the Olympic Games compounds. Armed police with bomb-sniffing dogs now patrol the city’s railway and subway stations. An additional 2,000 security guards as well as 200 X-ray machines are in the capital’s 93 subway stations watching for guns, knives, explosive or flammable liquids. Even chemical substance monitoring systems seem to have been installed in focal places.

Meanwhile, Beijing has placed 300,000 surveillance cameras throughout the capital to monitor any suspicious activities. Access to all Olympics venues is being constantly screened, with everything from standard metal detectors to technology for fingerprint and iris scanning. China will spend a record $6.5 billion on surveillance equipment.

Chinese security authorities will also employ drones to patrol for security threats throughout the Olympics games, said a state media report that called it the country’s first “known” use of such aircraft. Indeed, drones were among three dozen other “anti-terrorism weapons” to be employed to maintain security during the Beijing Olympics that were put on display in the eastern city of Jinan in Shandong province. Other security measures employed include remote-controlled bomb disposal robots and battery-powered two-wheel segway vehicles to be used by armed police on patrols. With every hour remaining before the start of the games, tension in China and not only in Beijing itself is rising constantly. Will the terrorists strike?