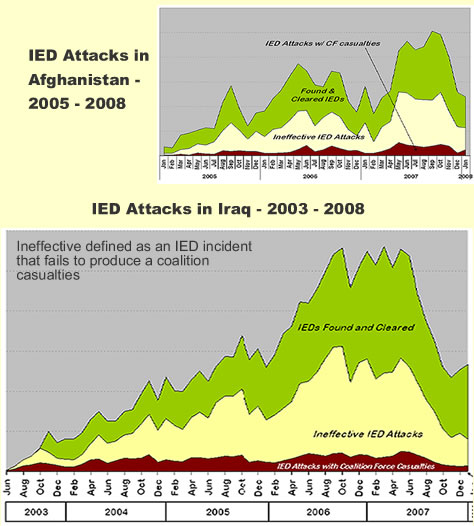 The latest information on the improvised explosive devices (IEDs) was the focus of remarks delivered by Joint IED Defeat leadership at a recent Arlington, Va. government-industry summit. The 2008 Counter-IED Summit, sponsored by the Institute for Defense and Government Advancement, is a forum that focused on understanding and reducing the current IED and EFP threats. The recent event was held in Washington in January 2008. Attendees included senior level professionals from military units, government agencies, contractors and technology service providers. The Counter-IED Summit 2008 was sponsored by Defense Update.

The Joint Improvised Explosive Device Defeat Organization (JIEDDO) kicked off the summit with an overview of the evolving threat. Established by the Department of Defense, JIEDDO’s mission is to support combatant commanders in their efforts to counter IEDs.

In his keynote address, Navy Capt. Jeff Trumbore, JIEDDO Division Chief, Technology and Integrations Requirements Division described JIEDDO’s mission and commented on the recent decline in the number of IED incidents in Iraq. Trumbore is responsible for the technology requirements and technology solutions for countering IEDs.

“IEDs are the weapon systems and there is a variety of weapon systems in subcategories underneath IEDs,” Trumbore told his audience. “We have been effective, the surge has worked; the technology pieces that have been put in place have had an impact. It has shifted the enemy’s tactics and has quieted the enemy down.”

JIEDDO’s strategy focuses counter IED efforts using three lines of operation: Attack the Network, Defeat the Device and Train the Force. “‘Attack the Network’ is one of the biggest areas where JIEDDO has made progress; we enable the services to go after the network,” Trumbore explained. “Attack your enemy before they can take action.”

JIEDDO supports units conducting offensive operations through improvements to intelligence collection, information operations, forensic exploitation and surveillance. These initiatives become long-term Service programs of record that provide an enduring Counter-IED (C-IED) capability to the warfighter. One highly successful program targeting IED networks is the Law Enforcement Professional program. After noting similarities between organized crime and IED networks, JIEDDO funded the LEP program to leverage the knowledge and skill of former law enforcement experts to attack the IED network activities. It has enabled the services to disrupt the vast network by expanding operations beyond emplacers and target the finances, explosives, supply line of parts and the brains that build IEDs.

Unmanned airborne systems have also been highly successful in providing surveillance capability for counter-IED efforts. A successful counter-IED initiative that has been transferred to the Army within the last year is Warrior Alpha, an unmanned airborne system with intelligence, surveillance, and reconnaissance capabilities. “Putting ISR assets over the target is critical to giving the folks in theater air detection capabilities,” Trumbore said. “JIEDDO has sent six initiatives to the Services under the detect air capability.” Trumbore also highlighted the importance of training. ‘Train the force’ is a key element of the JIEDDO strategy. JIEDDO supports initiatives that will provide the latest training, equipment, tactics and information to deploying service members. Between fiscal year 07 and fiscal year 09, JIEDDO funded 26 initiatives to assist the services in conducting training. This training dramatically increases the warfighter’s ability to perform C-IED tactics and saves lives.

C-IED Training for the Warfighters

Through its Joint Center of Excellence, a training arm headquartered at Fort Irwin, JIEDDO supports the Services to provide realistic training in all facets of defeating IEDs including identification of the devices and their components. Service members preparing to deploy train with the latest C-IED tactics and equipment that mirror the systems they will employ in Iraq and Afghanistan. “You can put all the technology out forward, but if you don’t have a solid training program you have not thought through the how to train the soldier to use this technology,” Trumbore said. “A lot of the technology that has been proposed to JIEDDO is something only a PhD can use. The soldier in the field must be able to put the technology to use.”

One example is the Counter Radio-Controlled Electronic Warfare (CREW). JIEDDO funded the purchase of 35,157 CREW systems, a new-generation jammer that has cut in half the number of remote controlled IED attacks in Iraq. “CREW has been extremely effective and has driven the insurgents to other tactics,” Trumbore said. “It is moving to the Services as programs of record, they have proven their worth.”

To train service members on how to use the equipment, units are exposed to six types of CREW devices they will find in theater, namely, the vehicle-mounted Duke and the man-portable Guardian systems. Additionally, the JCOE has trained over 1,400 personnel in Electronic Warfare (EW) training, including three EW courses that prepare CREW operators to employ the systems to best effect. “We enable the services to come up to speed with new counter IED training, not at the speed of the Pentagon but at the speed of the tactical environment,” Trumbore said. “JIEDDO has the ability and funds to make quick changes to influence the training base of the Services prior to sending folks overseas.”

Lastly, Trumbore spoke about initiatives that defeat the IED itself. Defeat the Device works to enhance commanders’ freedom of action for safe operations and to reduce the effects of IED detonation at the point of attack. “‘Defeat the Device’ is tangible,” Trumbore said. “You can see it, put armor on a vehicle, give a detector to someone, and add sensors and new capabilities, as the route clearance package, but the only problem with Defeat the Device is that you already have lost the battle, since the IED is already in place.”

Near and Long Term Solutions

During 2007, JIEDDO continued to fund commercial-off-the-shelf solutions and develop capabilities to ‘defeat the device’ and reduce the effects of IED detonations. These include armor packages for vehicles, route clearance blowers for suspicious roadside litter and the modular mine roller system are examples where JIEDDO’s initiatives are saving people’s lives every day.

The long-term threat posed to U.S. strategic interests by IEDs requires continuing support from industry and government. In the last year, JIEDDO received 1335 technology initiatives from which 89 were funded for Joint Urgent Needs of Warfighters. JIEDDO’s new Broad Area Announcement (BAA) containing guidelines for technology developments was posted on the JIEDDO website Feb. 8, 2008. The BAA contains the latest information targeted for what deployed units need now.

“From a training industry perspective, we need help with surrogates to provide realistic training without violating FAA rules,” Trumbore explained. “We need persistent ISR capability on platforms that already exist. We need “plug and play capability” in theater where you can swap out sensors, adding to mission capability. We are not interested in unique assets without a supply chain.”

JIEDDO will be holding its semi-annual JIEDDO Technology Outreach Conference April 8-10 2008 in Denver, Colorado. For more information, email questions to [email protected] To submit a proposal, visit the JIEDDO Bids Portal at www.jieddo.dod.mil and click on proposal submission.