DSIT Solutions Ltd. From Israel is announcing at IMDEX three new order from Asian customers, for AquaShield Diver Detection Systems (DDS) worth US$5 million. The new sonar launched in 2008 is designed to detect divers and protect fixed and relocateable installations, such as ports, coastal facilities and stationary vessels.

The first AquaShield system was installed in 2007 to protect an oil terminal in Poland. In 2008 the company supplied systems worth $8 million, including a complete harbor surveillance system capable of detecting, tracking, classification and promptly responding to above-water as well as underwater threats. “We are currently experiencing a growing demand for our products due in part to the surge in terrorist activities around the globe.” Dan Ben-Dov, DSIT’s VP Sales & Marketing told Defense-Update. The systems, to be used at undisclosed locations in Asia, will guard and protect the customer infrastructure from underwater intrusion and sabotage. The system will include multiple DDS units, which will be combined and integrated into a comprehensive surveillance system. He said the system has proved extremely reliable, operating around the clock.

The need for improving monitoring and detection of underwater threats were realized in recent years, as the risk of terror attack became more realistic. “Current marine surveillance solutions often ignore the areas of underwater surveillance and underwater site security, tracking only above-water activity, and leaving the area under water vulnerable to intrusion by divers and Swimmer Delivery Vehicles (SDV).” said Ben-Dov, “Navies, governments and commercial companies are becoming aware of the need to protect critical marine and coastal infrastructures”. DSIT’s AquaShield provides such capability with an unattended sonar system that detects tracks and warns of unauthorized divers and SDVs activity throughout the protected area. According to Ben-Dov, AquaShield provides positive detection, with low false-alarm rate at the longest possible range, utilizing very-low frequency sonar, augmented with resolution level adequate to detect a human diver and SDV while ignoring potential false targets such as large fish and water mammals. Operating over an extended range enables the system to evaluate multiple potential threats simultaneously and provide the operators with early warning, conduct identification and pursuit of the threat, thus improving overall response times

The system provides automatic detection, tracking and target recognition, locating potential threats at a sub-meter resolution, in a specific sector prevents site shutdown on every alert, while enabling security units to employ the necessary intervention. AquaShield tracks can be relayed to a remote display unit, installed on a patrol boat, enabling rapid and effective interception of maneuvering targets.

The DDS operates unattended and is integrated into existing command and control systems, monitored and controlled through a single console. DSIT offers the sensor in three versions differing in their coverage configurations – 120°, 240°, and 360°, thus adapting to different site topography. Each sensor provides a ‘node’ in the security network. Such sensors are installed on a jetty, breakwater or pier, where the underwater sensor is attached to an electronic control unit located above water, or on the seabed, where the sensors are fitted with integral electronic processing unit. Underwater sonar units are strategically placed underwater to provide maximum coverage of the protected area. The number and configuration of nodes are customized to meet each site’s unique requirements and topology. The system can be deployed within one hour and operate in all weather and water conditions.

In 2009 DSIT expects to surpass last year’s sales. By May this year the company added three major customers in Asia, among them a $1.7 million system installed in a large energy facility and a $2.3 contract with an Asian government, installing comprehensive port security solutions, all based on the AquaShield.

AquaShield sensors (image above) can integrate into a port security utilizing a single console (left) where underwater sonar sensors and alerts are integrated with perimeter and area security and surveillance systems such as remotely controleld EO sensors seen on the right. Photo: DSIT 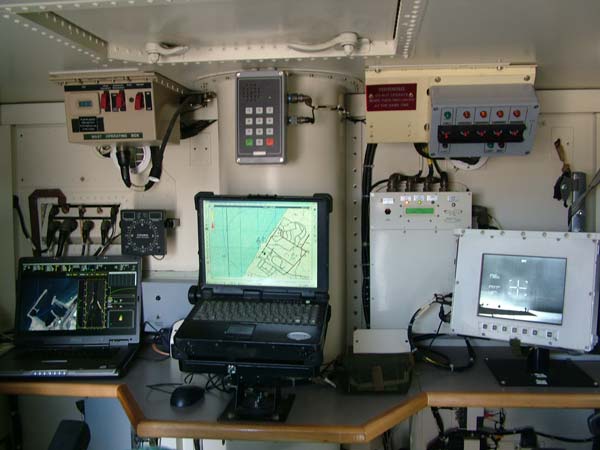