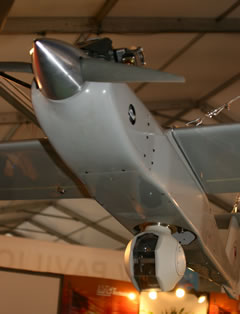 The SpyHawk air vehicle developed by MTC is currently operated by the US Marine Corps for evaluation of future UAV operational concepts and tactics. SpyHawk is a ‘small uav’, weighing about 85 pounds (maximum takeoff weight) it can carry a payload of about 13 pounds on a 12 – 16 hour mission. Maximum payload capacity is about 20 pounds. The SpyHawk is a lightweight system, launched by a pneumatic launcher from a trailer towed by a light truck or HMMWV. The system is STANAG 4586 compliant, responding to a USMC requirement.

“The adaptability of the SpyHawk UAS makes it a valuable tool for warfighters and for use in the war against terrorism, as well as for civil and commercial applications,” said MTC President and Chief Operating Officer Mark Brown. The SpyHawk carries a stabilized EO/IR payload developed by Optical Alchemy, Inc. (OAI). This payload is installed in a unique mechanical ramp installation, retracting the payload before landing. Weighing less than a pound, this unique mechanism enables the SpyHawk to mount the payload at the belly position, offering optimal, unobstructed coverage of a large area. The retraction movement is performed within 1/8 of an inch around the center of gravity, contributing to the stability of the aircraft in the transition phase.

MTC based its SpyHawk system on a platform designed by Arcturus UAV. Two versions were designed by Arcturus – the smaller 28 pound dry weight T-15, is powered by a Honda 50cc four stroke engine, accelerating it to a top speed of 90 kt carrying a payload of about 10 pounds. The company also designed a larger version configured for long endurance missions of up to 16 hours; adding 2’10” to the wing span the T-16 XL uses a 60cc engine carrying 20 pounds payloads. It can also fly shorter missions with a 30 pound payload. MTC’s SpyHawk, proposed for the USMC Tier II program, representing something in between these two platforms. The SpyHawk has a wing span of 12’9″, similar to the T-16. It is powered by a 57cc engine and, equipped with all mission systems, has a dry weight of 62.7 pounds (compared to 28 pounds for the T-16). Its maximum speed has not changed (90 kt)but cruising speed was reduced to 45 kt, to optimize mission performance. Its endurance is up to 16 hours with payload capacity of 20 pounds. The SpyHawk has already been selected for testing by the USMC, for evaluations of Tier II class systems tactics, techniques and procedures (TTP).

The SpyHawk is currently flying as a test-bed by the US Marine Corps, for advanced technology evaluation. Lessons learned through these evaluations will be used for the next phase of the Corps’ Tier II UAV program, The US Navy is expected to issue request for proposals for tactical (Tier II) UAVs before the end of the year. MTC’s commercial version of the SpyHawk is offered to civic and industrial customers, for monitoring of oil and gas pipelines, utility transmission line surveillance, power plant and nuclear facility security, railway line monitoring, agriculture and forestry monitoring and other applications.