With the ability to provide real time evaluation of the battlefield, NCW communication infrastructure is built to handle the hurried shift from routine communication activities to wartime operations. This move requires flexibility, scalability and redundancy.

But what are the requirements for truly network centric operations?

Suffice it to say that while the telecommunication requirements of defense forces might have changed over the years, the basic service definitions are in fact well defined and have remained constant. The network infrastructure and its supporting services are an essential part of the organizational strategy, and as such need to support the military equivalent of business processes.

The first priority is connectivity, or bandwidth. A robust NCW communication infrastructure must be able to support and transport the vast amounts of voice, data and video-based services to enable decision makers to gain a complete picture of the battlefield in real time.

Second, there is redundancy. In the civilian sector, a network failure may cause inconvenience and monetary loss in most cases. In the case of the military and defense corps, the slightest system down time may translate into a national security threat – an intolerable reality. The industry benchmark of “five nines” for network reliability, which is usually acceptable for non-military service providers, is not a valid option for an organization which demands “always up and running” systems.

Flexibility is another necessity, as the information transmitted must keep up with the rapidly changing battle realities and maneuvering forces. One may argue that flexibility is also important in civilian telecom. However, no operator has ever prepared itself for a scenario in which an entire city moves from one side of the country to the other. The level of flexibility demanded in the defense sector is significantly higher.

The foundation lies in the fact that an NCW communication infrastructure must scale in two major dimensions: volume (amount of users, bases, bandwidth and so on) and technology (allowing the phase-in and out of new and legacy technologies). Scalability is key when ramping up a communications system while moving from routine operations to wartime preparedness.

Based on these requirements, defense forces have several approaches to consider when deploying the infrastructure of a true NCW communication system.

The first is to imitate the methodologies present in the civilian telecom sector. This approach is primarily focused on capital expenditure (CAPEX) savings and may consider only the short to medium term requirements of the network build. The common practice in these cases is to design and build the network infrastructure to support service provisioning and capacity requirements for up to three years, assuming that future technologies and usage growth will require additional CAPEX for supplementary network build.

This, however, can cause serious disruptions to defense forces as the total life cycle cost of the network build is more important than the initial expense. Taking into consideration that militaries replace their infrastructure at a much slower rate (about once a decade) than their civil counterparts, if they adopt a technological path that did not mature or take a prime position, they may be faced with serious scalability and maintenance issues.

This “melding-approach” beckons NCW infrastructure, a platform which uses a similar methodology as the above, yet with a different implementation scheme and emphasis. The main intent is to minimize “total cost of ownership” and to streamline operating expenses (OPEX) by implementing an integrated management system.

This approach is harder to implement as it requires a longer planning process and a commitment to future needs. Done right, however, the benefits clearly outweigh any shortcomings.

Part III – Outlines the layered approach as implemented by ECI

ECI Telecom, a global provider of networking infrastructure, is a vendor with vast experience with building communications infrastructure for defense forces and overall expertise in the telecom field. This has placed the company in an optimal position to develop advanced NCW infrastructure, offering an architecture that relies on best practice technologies, in a layered manner, including: 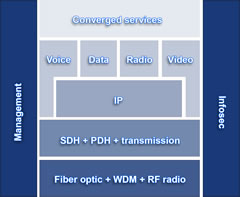 A layered approach assures that if a technology phases out or has to be replaced, it will not require the full substitution of the infrastructure, but rather only one of its layers. Additionally, it also allows for increased redundancy, as the system engineering does not rely on inherent equipment features but rather on a multi layer “shock absorbing” design. As part of this layered solution, defense forces prefer to use multi-service platforms to increase efficiency and reduce maintenance impact.

If we take, for example an air-defense scenario in which an UAV (Unmanned Airborne Vehicle) or radar system detects an unidentified aircraft crossing the border, split-second decisions must be made to bring it down or allow it safe passage. These decisions rest on the transmission of UAV video feeds to “the right locations” – including to the homes and offices of top commanders (using information security measures to protect the information flow).

The network must react both on the mobile domain (allocating bandwidth from the UAV connection to the access site for mobile forces), as well as within the stationary network (enforcing QoS policies to prioritize the real time video).

Another instance of the effectiveness of this network can be seen when defense forces move rapidly from routine operations to actual times of war in which troops may receive orders to be positioned at different locations and shifting battle scenarios require HQ to move quickly from one zone to another. The network can either enable the fast changes in service allocation, or may even have a pre-planned scenario that will run on the integrated network management, thereby making resources available at the click of a mouse, more efficiently and effectively than before.

While it is not well recognized, the role infrastructure plays in gaining network enabled capabilities is critical. ECI Telecom, with its focus on NCW infrastructure, has brought about a paradigm shift in the concept of building network-enabled capabilities. Based on its experience with defense forces around the world, ECI Telecom has not only developed leading technological solutions, but its overall approach to building NCW architecture guarantees a high-level of expertise necessary for the provision of optimal infrastructure. The foundation of this architecture rests not only on ECI platforms, but also on third-party best-of-breed interoperable products that come together to form an ideal NCW infrastructure solution.