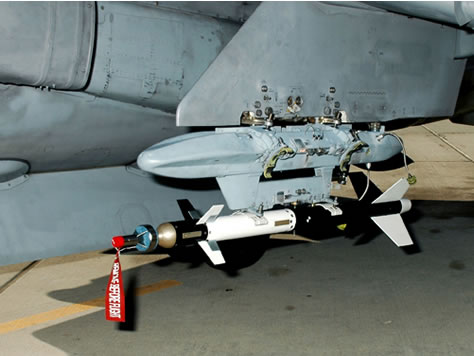 SCALPEL is a small weapon system that offers precision engagement while minimizing the potential for collateral damage in close air support and urban environments. It is a spiral development program incorporating the existing Enhanced Laser Guided Training Round airframe, minimal aircraft integration costs and development efforts, low technical and schedule risks, and affordable unit cost. SCALPEL can be employed on F-16, F/A-18, AV-8B, medium and large UAV aircraft, and other domestic and international aircraft platforms.

During the three tests, three inert SCALPEL weapons were captive-carried and released from two AV-8B Harriers from the U.S. Navy’s Air Test & Evaluation Squadron VX-31. The weapons were released from various altitudes and distances from their targets, demonstrating the range and accuracy of the system. The enhanced seeker accurately guided each SCALPEL to its target, and the advanced guidance and control system consistently demonstrated its precision. The next phase of the flight test program will demonstrate the warhead lethality and limited collateral damage.

“We successfully demonstrated the capability of our next-generation seeker with a number of first-time events in this mission and are very pleased with its demonstrated performance,” said Joe Serra, Precision Guided Systems senior program manager at Lockheed Martin Missiles and Fire Control. “Our team is now focusing on the next development phases including warhead effectiveness demonstrations, in order to provide this critical precision-strike capability to our Warfighters.”