Following the installation of the Joint Helmet Mounted Cueing System (JHMCS) in the US Navy’s F/A-18F, Vision Systems International (VSI) has been awarded an initial contract at more than $17 million from Boeing to equip 145 F-15E Strike Eagles with the helmet mounted display sight. Initial deliveries have already commenced and will continue through mid-2009. The new application underlines the advantages such systems offers for air-to-ground missions.

“The situational awareness capabilities afforded by JHMCS in the air-to-ground mission environment are necessities given today’s battlespace, and providing a dual-seat capability is phenomenally important,” said VSI President Drew Brugal “Getting our JHMCS on the Strike Eagle has been a key company goal since we started developing the system in 1996. ” VSI, through its affiliated company Elbit Systems of America is working on a JHMCS derivative equipped with four image intensified tubes, offering wide-field-of-view night capability.
The device, known as ‘Quadeye’ will be able to replace the JHMCS helmet visor, offering effective night operating capability. The USAF plans to evaluate such systems on the A-10C and F-16.

The JHMCS provides the pilot with “first look, first shot” high off-boresight weapons engagement capabilities. The system enables the pilot to accurately cue onboard weapons and sensors against enemy aircraft and ground targets without the need to aggressively turn the aircraft or place the target in the Head-Up Display (HUD) for designation. Critical information and symbology, such as targeting cues and aircraft performance parameters, are graphically displayed directly on the pilot’s visor. This information, combined with the display of data-link cues, as well as navigational and aircraft performance parameters, provides the pilot with a tremendous increase in situational awareness. 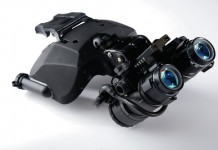