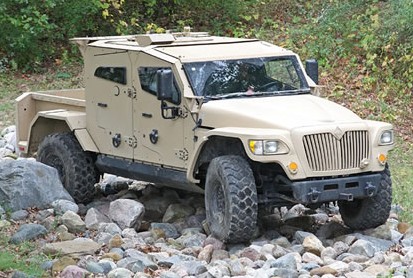 The British Ministry of Defense announced a plan to deploy nearly 1,200 new armored vehicles to bolster the protection and mobility of British troops engaged in combat in Afghanistan. The cost of the decision, announced by Defence Secretary John Hutton on 29 October, 2008 is estimated at £700 Million. 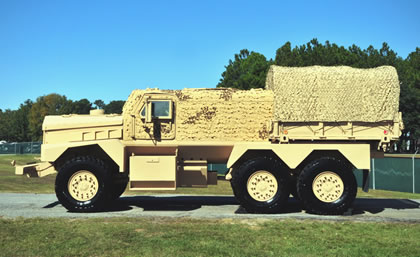 The plan focuses on the procurement of over 400 new ‘tactical support vehicles’, worth about £350 Million, to augment or replace up-armored trucks currently operated in theater. Due to the vulnerability of supply convoys, armored vehicles are overtasked in convoy protection missions. The deployment of payload optimized, highly protected TSV will improve the protection and load capacity of convoys, balancing the demand for escort vehicles. In addition to the new package, new shipments of ‘Ridgeback’ 4×4 protected patrol vehicles and Panther armored command vehicles and Buffalo route clearing heavy vehicles are expected to be deployed to Afghanistan early in 2009.

The Royal Marines are also seeking the replacement of BvS10 Viking articulated tracked vehicle with a new high mobility ‘cross-country’ vehicle that will provide better armor protection than the Viking could. The Marines are seeking to buy over 100 such vehicles, dubbed “Warthog”. MOD selected the Singaporean Bronco from ST Kinetics over an improved BAE Systems Hagglunds BV206 version. The Army is highly satisfied with its version of ‘cross country’ vehicle, the Jackal and is planning to continue buying 100 additional vehicles under the newly announced package. Additional equipment to be introduced are several route clearing vehicles, based on Force protection Buffalo, recently introduced by the Italian and Canadian armies operating in theater.

The British army requires three distinct categories of Tactical Support Vehicles (TSV) including a heavy armored flat-bed truck called ‘Wolfhound’ (TSV Heavy), which will be based on heavy platforms, such as the Cougar they are called to support. Force Protection was selected as the preferred bidder for this class of vehicle, at the benefit of maintaining commonality within the Cougar-based fleet. These vehicles will have the highest levels of mine blast protection.

A light weight armored vehicle will also be procured, to fulfil multi-purpose various logistical missions. This flat-bed vehicle, dubbed ‘Coyote’ (TSV Light) will also employ a Supacat 6×6 chasis, a derivative of the all-terrain Jackal. Coyote is designed to support the Jackals operating in the harsh terrain of Afghanistan.

A third class of medium-size medium protected TSV called Husky (TSV Medium) is also required to be utilized as load carrier, ambulance and mobile command post support. The Husky will also provide transportation and logistical support in areas where the heavy Mastiff and the heavy TSV cannot operate.

Further procurement and modifications are also being implemented with current vehicles, including 30 new Cougar vehicles (both 4×4 and 6×6) to be used as training vehicles. Armor upgrades are introduced with the Panther, facilitating theater specific protection as well as communication equipment. Snatch-Vixen, a new variant of the LandRover, specially designed for Afghanistan has also been produced, with extra power and payload which to enhance the mobility of the protected vehicle. This variant of the LandRover received a new running gear, chassis reinforcements, more powerful engine, and other modified automotive components to give the vehicle more power and the ability to carry a greater load.