Attached to the forward echelons and operated by the troops, Small Unmanned Aerial Vehicles (SUAV) have become a common element of support to the fighting units, providing a broad range of services to the warfighter, from intelligence gathering and target acquisition to battle damage assessment and force protection. Indispensable as they are, SUAV have one clear drawback – short range and mission endurance. System developers are aiming at extending their mission endurance, by energy saving and use of more efficient power sources. A new concept utilizing multiple SUAVs on a single mission enables a unit to maintain persistent monitoring of a mission area over a long time.

The Raven baseline system consists of three aircraft and two ground control stations was employed in the demonstration, operated by two-person crews operating in eight-hour shifts. In total, the Ravens flew 27 sorties with no system failures or mission aborts despite the presence of high winds, air turbulence and rain. In order to maintain continuous surveillance, the Raven system operators rotated the aircraft over the target: one aircraft operating on an alternate control channel would relieve the orbiting aircraft prior to the latter’s rotation back to the launch/ recovery site. The Raven system’s daytime color electro-optical camera and nighttime infrared camera payloads were employed to ensure continuous situational awareness. Autonomous guidance capability incorporated into the SUAS enabled operators to rotate the aircraft over the surveyed point targets, maintaining continues surveillance and sending live video streams of the target area throughout the mission duration. 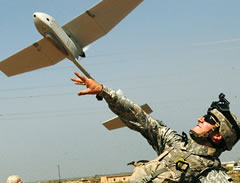 “This demonstration indicates that the Raven small UAS is capable of performing tasks normally assigned to limited, high demand, and higher echelon reconnaissance assets in a highly cost-effective manner.” said Dean Barten, Army product director for SUAS. General Manager of AeroVironment, Inc. UAS segment, John Grabowsky, also added that such persistent mission capability can be useful not only to military users but also to non-military applications for extended intelligence, surveillance and reconnaissance, such as border control, law enforcement, and communications and reconnaissance following a major storm.

The US Army uses the Raven as an organic mini-UAV operated at battalion level. It is also operated below the battalion, at companies and platoons, to provide “over the hill” intelligence quick response missions in direct support of the battalion’s activities. The 4.2 lbs (1.9kg) Raven can operate at ranges up to 10 km. Ravens are supporting Army units in Iraq and Afghanistan, enhancing U.S. Army, Special Operation (SOCOM) forces and other services, performing reconnaissance, surveillance, and target acquisition (RSTA).

As of November 2005, Raven became the official US Army Small UAV (SUAV), responding to a USSOCOM Operational Requirements Document (ORD). The buy is for 1,328 systems plus training and logistics support.

The current Army objective for Raven acquisition is 2182 systems, representing over 6000 aerial vehicles. The latest order was received in February 2009 as the U.S. Army awarded AeroVironment an order worth $41.7 for Raven SUAS systems fulfilling requirements for Army, SOCOM and the USMC. Apart from the US forces, Raven operators include the Italian, Dutch, Danish and Spanish forces.