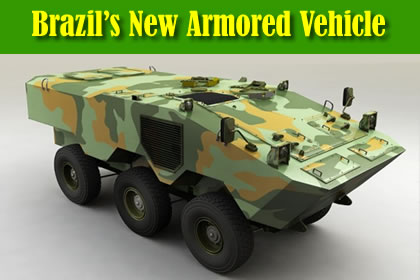 After a long delay the Brazilian Army APC replacement program is moving forward, with the formal unveiling of the ‘Armored Personnel Carrier – Medium’ (VBTP-MR) full scale mockup at the Latin-America Aerospace & Defense (LAAD) exhibition taking place in Rio de Janeiro this week. The vehicle is positioned to replace the country’s indigenous 6×6 armored vehicles, including the EE-9 Cascavel (rattlesnake) armed reconnaissance vehicle and EE-11 Urutu (serpent) APC, both developed during the 1970s by Brazil’s domestic armored vehicle manufacturer Engesa, one of the main suppliers to the Iraqi Army, that entered bankruptcy in 1993, after the elimination of their primary client – the Saddam Hussein’s army, in Operation Desert Storm 1991. Engesa finally closed shop in 2001 leaving thousands of vehicles operated by armies in Brazil, other Latin American countries and third world armies worldwide, leaving all with no spares and support.

Since the final collapse of Engesa the Brazilian Army has been seeking a solution to modernize and replace its aging and unsupported armored vehicles. Through a lengthy process that was cancelled in 2005 due to lack of funding, the Army selected the Italian company Iveco to design, develop and produce a new 6×6 18 ton, diesel powered platform, capable of amphibious operation. It is designed to carry 11 soldiers, and is equipped with a remotely operated gun turret mounting 30mm automatic cannon or 12.7mm machine gun. (The Cascavel currently mounts a manned turret with 90mm Cockeril Mk III cannon). Eying potential rapid deployments in support of peacekeeping operations, which provide a significant source of income for third world countries, the VBTP-MR is sized to meet the limited cargo bay of C-130 type aircraft. A first prototype will be built by Iveco and be ready for testing next year (2010). 16 additional vehicles are planned to be built by 2011 and followed by further procurement decisions to be announced later by the Brazilian army.

Along with the unveiling of the new VBTP-MR, Israel’s Elbit Systems announced the conclusion of an order from the Brazilian Army, to provide its UT-30 unmanned turrets for the new family of Brazilian APCs. The turret is delivered as a complete system, incorporating automatic cannon up to 30mm, a coaxial machine gun 7.62 mm, a Laser Warning System (LWS), commander panoramic sights and smoke grenade launchers. The gun and optronics are stabilized in dual axes and the sight integrates an automatic target tracker, improving firing on the move and engagement of moving targets. The signed contract covers the first phase of the program, with additional orders expected under a follow-on multi-year procurement. In total, the VBTP-MRs will replace the entire fleet of Brazil’s domestically produced wheeled AFVs currently comprising over 600 vehicles.