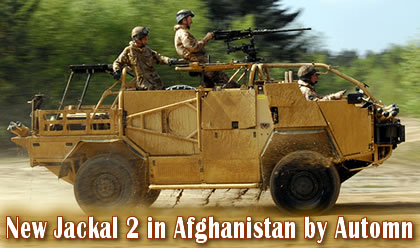 After encountering excessive casualties with light weapon carriers Land-Rovers, (WMIK), the British Ministry of defence (MoD) responded to an Urgent Operational request to send out a heavier vehicle, which could be better adapted to the operating conditions in Afghanistan, providing an armor protected platform with superior cross-country mobility. The M-WMIK introduced a new platform, based on a 4×4 high-mobility chassis produced by Supacat. The Jackal is perfectly suited to the operational terrain of southern Afghanistan, where speed and maneuverability are essential. Unlike the homogenous Mine Resistant Ambush Protected (MRAP) trucks, the M-WMIK, dubbed Jackal is fast and extremely agile – as Royal Marines Brigadier Buster Howes describes as ‘a complete revelation’.

The first Jackals were deployed earlier in 2008 to Afghanistan, operating with the 16 Air Assault Brigade. In October 2008 it was fielded with 3 Commando Brigade Royal Marines. MoD plans to procure about 200 such vehicles. The vehicle uses a unique airbag suspension system allowing a smooth ride over the roughest terrain and provides a more stable firing platform, while the vehicle is in motion. The revolutionary system can also raise the seven-tonne beast by more than a metre, allowing the vehicle to clear large obstacles, or enable its occupants to gain a better view of the field of operations. Jackal uses an independent suspension for each wheel to soften the ride over rough terrain. “Each suspension arm is independent so when you are cross-country and you hit a bump, the shock is only felt over one wheel while the ride continues to be completely stable and safe,” said Royal Marines Captain Orlando Roger. In addition to the suspension system, Jackal features a unique air-bag suspension allowing rapid movement off road. On road this 6.65 ton vehicle can travel 80 mph (130 km/h) but it is over tougher terrain where it excels traveling (officially) at up to 40 mph (80 km/h). According to Capt. Roger ‘It can do more than 50 miles an hour over most terrain – it’s like driving a dune buggy !”.

The vehicle, procured in just seven months, was originally designed as a purpose-built weapons platform and that is where Jackal comes into its own. The vehicles have a crew of three and are armed with a .50 calibre machine gun, automatic grenade launcher or 7.62 General Purpose Machine Gun (GPMG) with a second 7.62 GPMG for the Commander. The Jackal carries a general purpose machine gun and either a heavy machine gun or grenade machine gun, giving it heavy fire power over a 360 degree arc.

By the coming autumn British land forces in Afghanistan will receive the first shipments of 200 Jackal 2 vehicles, and Coyote Tactical Support Vehicle, procured as part of the £700m Protected Patrol Vehicles package unveiled by the Secretary of State for Defence, John Hutton, last October. Jackal 2 is an upgraded version of the Jackal which has proved to be highly effective supporting British troops in Afghanistan. The enhanced vehicle is designed to accommodate three crew members and a driver, (the original Jackal supported 2+driver), it features improved maneuverability and reliability. Jackal 2 will have a 6.7-litre engine giving it a top speed of 80 miles per hour (129km/h) on roads and 55mph (89km/h) cross-country. British troops in Afghanistan will also get the Coyote Tactical Support Vehicle, which is a 6×6 derivative of the Jackal. Supacat, based at Dunkswell, Devon, is the prime contractor for both programs, responsible for design, development, prototyping, integration and overall program management. Babcock will be responsible for detailed production planning, purchasing and manufacture at their Devonport dockyard facility.