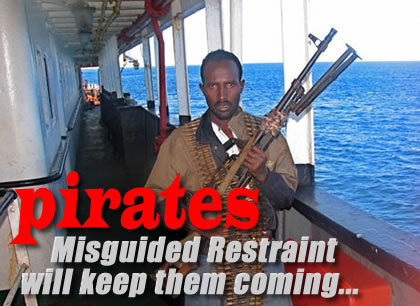 The misguided policy of restraint against the ever growing threat from pirates, roaming the high seas off the Somali coastline is becoming dangerously close to total surrender. There is little doubt left, that Islamic terror leaders will sooner or later exploit this signal of weakness and start substantial maritime terror all over the Globe, eventually bringing strategic shipping lanes to virtual standstill and with it, disaster to western economy.

Somali pirate activity off the Gulf of Aden and east coast of Somalia has soared into over a hundred pirate attacks lately. With it the cost of plying the treacherous route through the Gulf of Aden, which links the Indian Ocean to the Red Sea and the Suez Canal, has risen to impossible proportions. Beyond the potential need to come up with ransom payments, insurance premiums have already increased tenfold and will no doubt continue this trend, if determined action will stop this disastrous activity.

Temptations to take the longer route also have diminished as pirates extend their range. In response to international naval forces patrolling the Gulf of Aden, the pirates are already targeting ships up to 600 miles from shore farther south, intercepting several vessels between Kenya and the Seychelles.

Sofar counter action against the pirates has been, hesitatingly slow and ineffective, to say the least. Although scores of naval surface vessels from several states have been deployed in the area, their contribution to engage the pirates was virtually noncommittal. The pirates seem to ignore their presence and continue to rule the waves in their highly lucrative trade.

Adm. Mike Mullen, chairman of the Joint Chiefs of Staff, claimed recently that 16 countries have deployed naval ships to the region, but they cannot patrol “1.1 million square miles” with complete effectiveness. However independent naval experts believe otherwise. “With all that complicated satellite technology modern navies have these days it should be possible to track pirate mother ships.”

An example to this sordid state of affairs was clearly demonstrated only last Tuesday, May 5, when a US Navy Military Sealift Command ship, the Norfolk-based USNS Lewis and Clark (T-AKE-1), was approached by a pirate attack off the Somali coast. According to the official US Navy report: “Once shipboard lookouts spotted the two suspected pirate skiffs, the Lewis and Clark conducted evasive maneuvers and increased speed to elude the pirates.” The Navy also reports the ship’s embarked security team used a ‘long range acoustical device (LRAD)’ to issue verbal warnings to the approaching skiffs. The Navy says the suspected pirates then fired small arms weapons from approximately two nautical miles toward the Lewis and Clark, which fell one nautical mile short of the ship’s stern. There was no mention that the Americans returned the fire!

What was most surprising, is the official directive issued by the US Navy: “The actions taken by Lewis and Clark were exactly what the U.S. Navy has been recommending to prevent piracy attacks – for both commercial and military vessels,” said Capt. Steve Kelley, Commander, Task Force 53, to which Lewis and Clark is operationally assigned. “Merchant mariners can and should use Lewis and Clark’s actions as an unequivocal example of how to prevent a successful attack from occurring.” If this is the official directive, than one can expect much more deadly encounters with the pirates, which will cost lives!

However, there are also different views on this sensitive issue. Gen. David Petraeus, chief of U.S. Central Command, said only last month that the maritime shipping industry must do more on its own to stop pirates. “There are a number of actions that need to be taken,” Petraeus said. Among them, it is important the maritime shipping industries get more serious about this problem.” “They are going to have to take a very hard look at not just taking additional defensive preparations in terms of simple things, like concertina wire, Israeli cargo ships use, to make it harder to climb over the side, or again over a railing. But Petraeus is also looking at the employment of armed guards or security forces on merchant ships. We already put them on many of the ships that have our equipment on them, the General said. Well, who is right here, the Navy or the Army?

And there are indeed others who have already taken decisive action. France is at the forefront of multinational efforts to protect the Gulf of Aden, a strategic shipping zone, and the north of the Indian Ocean, operating there since last December. In April, French Navy commandos stormed a French sailboat held by pirates off the Somali coast in an assault triggered by threats that the passengers would be executed. It was the third time the French have freed hostages from the hands of pirates “Negotiations were leading nowhere, and the boat was approaching the coast, the official report said.” Under clear orders, from President Nicolas Sarkozy, France’s policy is to refuse to allow French citizens to be taken ashore as hostages.

The Germans seem to adopt the French attitude to counter piracy as well. Last April the German-Italian cruise ship “Melody” carrying 1,500 people on board fended off a pirate attack far off the coast of Somalia. The pirates attacked the Melody and opened fire under cover of darkness, but retreated hastily, when an Israeli armed security detail, aboard the cruise ship returned accurate automatic fire and chased them off immediately!

Unfortunately, the piracy-plagued shipping industry is still resisting calls to deploy armed guards on cargo ships, fearing it will not stop pirate attacks and could make shipping lanes off Somalia’s coast even more dangerous. They emphasize the disastrous explosive hazard effect that a fire exchange defending a supertanker could cause. The argument is also raised, that seamen would be unable to actually use weapons proficiently, without special training, for which they are not qualified by their non military trade. That may perhaps currently, be the logical case, but there are sufficient highly trained naval commando forces available in many western navies and if counter piracy will declared a top national priority, their deployment will become imperative to stop this harassing quandary once and for all. Moreover, if seamen will continue to be confronted by the deadly threat from pirates, it is only natural that they will wish to defend themselves adequately.

It takes of course, expert practice, shooting from a rolling, pitching, yawing, surging, swaying, heaving platform to target a small speedboat on the high seas. Indeed, shooting small arms from a ship at sea and score a hit, is more of an accomplished “Art Form” than it is a practiced skill. One has to be “in tune” with the harmonic motion of the vessel, to be able to put small arms slugs accurately inside the target’s body at 100 meters, in daylight or darkness of night. Using modern targeting equipment, like monocular scopes that can vision heat and draw a bead on target will certainly help, but it still requires considerable training and skill. US Navy SEALs, UK Royal Marine Commando and the French, not to mention the Israeli elite Naval Commando are absolutely expert at this sort of warfare and only await the right order to go into action.

U.K. to Set Standards for Maritime Private Security Companies by the 2012 Year’s End 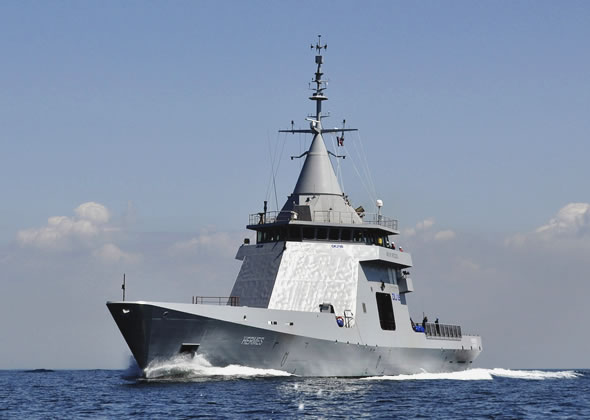 Unmanned Assets Could Save 75% of Cost of Anti-Piracy Operations