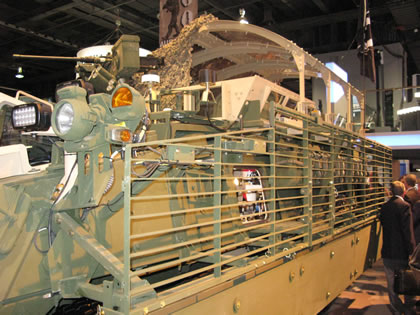 General Dynamics Armament and Technical Products (GD-ATP) will provide reactive armor tile sets for the U.S. Army Stryker family of vehicles. The $150 million contract is scheduled for delivery within 10 months, by March 2010. Reactive armor system comprises tiles that fasten to the exterior of the Stryker family of vehicles, allowing it to better withstand hits from a variety of anti-armor munitions, primarily RPGs. The reactive armor kit will replace the Slat armor currently used with Strykers in theater. While providing effective defense against RPGs, Slat offers ‘statistical’ protection rather than an assured defeat of the projectile. Furthermore, the kit, designed by Rafael, can be tailored to address a wide range of threats, utilizing the ‘hybrid protection’ approach. The reactive armor solutions currently offered by Rafael are presenting enhanced capabilities over the tiles employed on previous systems, including improved effectiveness, protection against a wider range of threats and increased safety, utilizing insensitive sheet explosives activated only when triggered by shaped charges.

The recent contract represents one of the largest reactive armor-upgrades planned in recent years. As such it was fiercely competed between two of the leading armor providers – GD-ATP and BAE Systems. The original developer and designer of these reactive armor systems is Rafael Armament Development Authority from Israel. The Stryker add-on armor is the second reactive armor program GD-ATP is jointly conducting with Rafael. The two companies are also cooperating on the supply of reactive armor systems for the M-2 Bradley, for which the team has won repeated orders worth hundreds of million US$. Two years ago GD-ATP also competed with its own reactive armor solution, and won another program, for the delivery of reactive armor kits for the M-1A1/A2 Abrams tanks. However, the company did not win follow-on orders after the first contract. The prime contractor for the Stryker vehicle is General Dynamics Land Systems.

Production of the armor kits will be performed at the General Dynamics’ facility in Camden, Arkansas, and will create 20 new jobs at the Camden facility in January 2010. Program management will take place in General Dynamics’ Burlington Technology Center in Vermont. As a strategic partner, RAFAEL Armament Development Authority Ltd., Ordnance Systems Division, will share the production workload in Haifa, Israel. 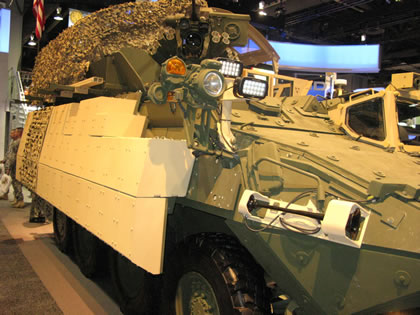 Above: Reactive tiles kits developed by Rafael for the General Dynamics Land Systems Stryker vehicle are providing improved protection to the hull, at weight levels comparable to the Slat kits. However, the use of reactive armor offers better protection, improved stability and maneuverability, compared to the much wider Slat. Below: For Strykers remaining with the Slat armor, GDLS is offering an expanded skirt protecting the lower hull and wheels. Photos: Defense Update