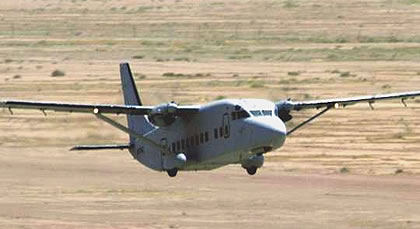 Four Shorts 360 Sherpa aircraft are currently operating in Iraq, flying some 25 missions per week, as part of the Constant Hawk Iraq (CH-I) operated under Task Force Observe, Detect Identify and Neutralize (TF ODIN) operating in country. Constant Hawk Afghanistan (CH-A) was established in January 2009. Due to the altitude, the aircraft are required to operate when passing mountain ridges equipped with new, pressurized C-12 King Air 350. These aircraft are deployed with a version of the Broad Area Surveillance System designed for daylight operations.

According to the manufacturer, AWAPSS simultaneously collects registered 100 mega pixel images in the visible and infrared wavebands at one frame pair per second. The AWAPSS system consists of three segments: a sensor mounted on the aircraft- mounted gimbaled platform, an image and data storage unit and the operator’s station. The system captures and records imagery at a spatial and temporal resolution, required when detecting and tracking targets of interest. The sensor segment housed in a flight-qualified turret is planned to be installed on several Unmanned Aerial Vehicle platforms, to include a high bandwidth data link. Future upgrades of the system will extend the coverage and performance, supporting near real-time processing of intelligence to be transferred via datalink to the mission control center, supporting target analysts with improved processing tools.

Typically, the Constant Hawk aircraft loiters above a ‘Named Area of Interest’ (NAI) for several hours, collecting and building large, a high-resolution image database of the terrain, including the history of activities. This information provides ‘ ‘forensic intelligence’ for analysts seeking minute changes, indications of enemy activities, and identification of areas requiring increased surveillance through other assets. This method of operation enables Constant Hawk providing early warning delivery of potential IED attacks and other critical information, to be forwarded to commanders within hours of completion by each mission.

Developed under the Pentagon Joint IED Defeat Organization (JIEDDO) initiative, the new airborne sensor is designed to collect and record high-resolution, visible electro-optic and infrared imagery over a wide area of interest, continuously monitoring, recording and analyzing activities on the ground.

Below: ITT Space Systems Division and Geospatial Systems Inc. are currently developing an Electro-Optical Wide Area Persistent Surveillance System for Improvised Explosive Detection (IED), Homeland Security and Wide Area Event Surveillance. This is the first scalable aerial camera system with the capability to produce up to an 864 mega-pixel direct geo-referenced image in real-time. This system provides a very large Field of View to cover a large metropolitan size city in a single series of captures. Effective Ground Sampled Distance (GSD) is below 1-meter from above 15,000ft AGL. The system provides the ability for real-time tactical downloading with on board JPEG2000 hardware compression from the Air Platform and full on board storage for forensic analysis.